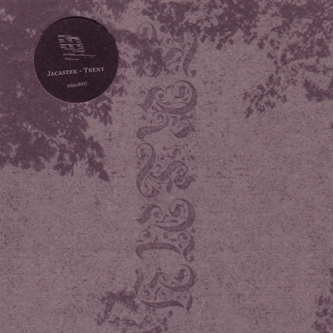 There’s something to be said for the seasons, though they cycle regardless of mere musicians. It’s doubtful that Jacaszek’s wordless, cathedral resonance would evoke such deep-sinking depression, the kind one luxuriates in and is inspired by, were it not also for long autumn walks down deserted streets, brittle leaves degenerating on brisk winds, and the baleful thoughts that accompany you when no person can or wants to. Treny came out of nowhere, like it slipped up from behind me, and now it’s filling my headspace with the molt of its ghosts. Boy do those leaves look dead.

Clips and adumbrated noise make the minor chord classical and choral arrangements even more sinister, like a shadow sister to Efterklang’s similarly combinatory but more effervescent formula; yet melancholy unsettled by the glitch in the pit of its own stomach is only one of the reasons this album is a lasting and revelatory listen. Jacaszek also lend themselves easily enough to meta-conditions, music-about-music statements on the possibilities afforded by electronic tools—enough so that I couldn’t help but think throughout my many, many listens that the album approaches a new watershed for how indistinguishable electronic and organic instrumentation can be in talented enough hands. For a long time I wondered if electronic music was a dead-end alleyway, an obvious way to either put fresh gloss on traditional songwriting or to clumsily blow it up; that is, unless one was crafting yet another slavish, dull-witted album at the altar of IDM or was jettisoning that craft into a vacuum of distancing technicality. Treny, on the other hand, should do for electronic and indie-classical music what Pan’s Labyrinth did for mainstream folkloric retellings; the style draws you in, but it’s the breadth of technology’s reach that leaves one with the feeling that they’ve witnessed some small node in a broader redefinition.

The insight provided by cinematic touchstones is much more obvious in the listening. Where “Rytm To Niesmiertelnosc” encapsulates and features a little bit of each of the album’s many strengths, the middle section of “Zal,” “Powoli,” and the absolutely haunted “Taniec” is more telling for its forsaken soundtracking and unsettled anxiety. So hooray again for technology but Jacaszek’s patience and vision are tributaries to traditions much larger and historical than what teems at the surface. The album remains closer to classical than to electronic throughout, and this is both humble and remarkable songwriting, a simultaneously staid and accomplished achievement made possible by an educated perspective. The group does not rely exclusively on cut-ups for evocation; sudden breaks in sound are not manipulations as much as knowing arrangements and strategically placed ambience, specifically on those mournful vocals, which cast subsequent tools as just that—tools in service to the larger project of right-brained narrative. All that’s missing from Treny are the visuals.

Here there be subterranean rhythms, such as on “Orzula,” where pulses are exhalations; the punctuated “Walc” is a struggle for that same breath, meaningfully spliced into the album’s most non-linear arrangement. The two might represent the album’s poles between pre- and post-construction, but together they also form an alimentary prayer: foreboding on the one hand, nostalgia on the other. That’s the evocative power of something so seriously and effectively pulled off: the implication can be a warning or an elegy, can tap in to the fascination we share for apocalyptic disaster stories and sensational drama or the repugnance we show for inauthentic bastardizations of that primal fear. And, just like a good story, “Rytm To Niesmiertelnosc II” ends a desperate clop with the album’s first and last note of real hope.

Simply put, vocalist Maja Sieminska, violinist Stefan Wesolowski, cellist Ania Smiszek-Wesolowska, and arranger/producer Michal Jacaszek have created a tour de force, and most likely my pick for album of the year. Treny deserves several close listens, alone, in head phones, along dusk paths and after weighty moments; it deserves exclusive spaces and gestures of inebriated faith; it deserves expansive praise for its veneer and intimate appreciation for its romanticism. It demands all this with cold hands and an ache in its heart. Melodramatic, perhaps, but all the more impressive then for making a believer of me.