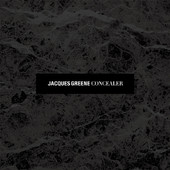 On 2011’s “Another Girl,” Jacques Greene played out a vocal sample which he cut the throat of just before its emotional climax, a breathy female purring “You’ve got me feelin’ like a-” before the words are swamped by his production. Yet the track focused more on its aesthetic qualities, the deliriously sweet sound requiring the inclusion of the vocals rather than the sample demanding a narrative and importance of its own. Since then, Greene has gradually permitted his samples more of a free rein over their own destinies, Amerie given full license to push the boundaries and risk a quite brash sensuality in “What U R” towards the end of last year, the first inkling that passion might not be so natural to subvert for Greene. And then, of course, Greene’s penchant for setting R&B songs into a context of his own comes full circle with this, Concealer, which marks the point where reservation is fully placed to one side.

“Flatline” possesses just the contrasts Greene’s body of work always hints at. There’s the low, bubbling synths of the verse versus the sharp, piercing keyboard strokes and unrestrained feeling of the chorus; the ceding of power from the lover of a stricken partner from “I reached you when you needed” to the heartfelt “I’d do it all again for you,” shifting back again to the imperative “Don’t tell me how I feel / Don’t call me and that’s what’s real.” Greene proves that he has his grip on the contrasting dynamic of a relationship both in the sweaty pulse of vodka shot debauchery (“Another Girl,” “What U R”) and that of the sobering intimacy between those genuinely close. It’s as if he feels that he’s reached his conclusion with regards to operating satisfactorily within the boundaries of his cohorts: if the track does refuse to display new brightly-coloured feathers in Greene’s (snapback, Obey™) cap, it can rest comfortably knowing that it provides at least a few pale shades of ambiguity.

Concealer is by no means a seminal work. I have followed the progression of Jacques Greene closely, my attention increasing steadily from what began as merely a passing curiosity, piqued by his demo releases. Recently he told the Guardian that he’s hesitant about releasing a full length just yet, reasoning that he “doesn’t want it to be just another producer album.” The fear is certainly understandable, but sits at odds with Concealer‘s mid-section, “These Days” and “Clark” being decidedly “producer” songs. The former features atypically glimmering arpeggios laid over a stuttering drum rhythm, the latter just drifting without any truly remarkable features; neither the kind of track you’d expect from an artist who just might someday convert his tasteful curation into something classic.

To do so, though, he’d have to demonstrate that he can work not just artfully within the zeitgeist, but ahead of it. His current creation is pushing him far beyond the easy limitations of coldness and isolation beneath the digital curve, much like the way William Bevan did with his Burial project on Untrue (2007), tapping into the fundamentals of pop and R&B tracks and finding them twenty times more evocative when recontextualised. Closer “Arrow,” a collaboration with similarly hyped Koreless, underlines why it is important that Greene continues to break out and push forward, their collective voice saying little more for either of the young producers than their previous personal efforts. Greene has decisions to make, in terms of critical perception and artistic development—he surely knows that appearing in “next big thing” videos famous firstly for explicit use of the c-bomb is a wave which can only be ridden for a limited period of time. I retain quiet confidence that he will yet discern between that which is temporal and that which is more lasting.