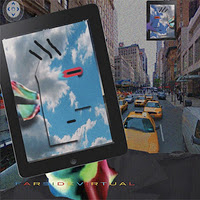 Far Side Virtual, James Ferraro’s umpteenth release of the last several years, marks a major departure for the hypnagogic pop musician. It sounds like very little of his prior work, which often relied on tape hiss, guitars, samples rendered unidentifiable and parodic takes on pop songwriting to explore the effects of late-stage capitalism (the liner notes for 2008’s Last Action Hero, for example, include a narrative about a society that develops its own language and evolutionary lineage after getting lost inside of a Costco, which is seen by its survivors “as a sustaining mother nature type provider bio-dome”) while seeming to acknowledge the absurdity of such an undertaking. Surprisingly, it is almost certainly going to be considerably more familiar for the uninitiated listener than anything else he’s ever done—albeit not in familiar ways—and it is practically guaranteed to come across as all the more jarring and strange because of it.

Discussions of sampling always touch on notions of familiarity. People I know have argued, for example, that Jens Lekman’s “Maple Leaves,” a song made up of at least eight samples with new vocal melodies and a totally different structure, doesn’t do enough to transform the source material when compared to something like the Avalanches’ “Since I Left You.” I’ve also heard arguments that it’s a weakness or failing to use samples that are either totally ubiquitous or so obscure that most listeners will probably never pick up on the fact that they’re not by the artist doing the sampling (until, for example, the bulk of the backing instrumentation that makes up Washed Out’s “Feel It All Around” is revealed to be Gary Low’s “I Want You,” and suddenly the work stands only in that context and not alone).

With Far Side Virtual Ferraro does something infinitely stranger and more disarming: he samples from sounds that virtually everyone recognizes, but never from pop music. Instead, he employs such elements as video game console home screen background music, stock noises provided with consumer operating systems, and Skype alert sounds atop hollow MIDI tones that AOL’s house composer, if such a position ever existed, might’ve thrown together on a workstation to serve as backing tracks for VHS tapes designed to accompany every differently-labeled floppy disk the former internet giant mass-mailed. It’s the sound of the future as re-imagined through an insanely specific and not especially pleasant lens—the cover even looks like that of a Microsoft consumer product from the mid-‘90s—and the general sense it conveys is one of discomfort despite the absence of a single moment of defined, obvious dissonance.

Everything here isn’t just artificial; it’s proud of its artifice, drawing attention to just how weird an entirely synthetic world sounds and feels. The first voice one hears on the album comes in its second track, “Virtual Lunch,” as a text-to-speech reader asks its listener if they would like to read the New Yorker on their tablet atop an instrumental defined best by the bombastically loud solos that come in its final seconds, sort of resembling horns while not actually resembling any organic instrument at all. In “Sim,” an entirely-synthesized voice, atop fake horns, pianos, and strings, explains the idea of SimCity as “a cool city with people filled just like me… / Imagine a playground of endless terrain.” Later tracks use these voices to imagine such interactions as what happens when machines discuss nausea and the effects of ordering sushi from virtual waitstaff (with accompanying noises to indicate the hypothetical user selections), painting a picture of an environment totally devoid of human contact far more creepy than convenient.

If Ferraro comes close to imagining anyone else’s sound across this record, he comes closest to approximating trumpet player Jon Hassell in the first half of “Bags,” an almost meditative piece built predominantly out of Windows startup and that practically recalls his and Brian Eno’s early ’80s work for a minute, but this comes to a swift end as deliberately off rhythms Hassell would never touch introduce themselves. “Adventures in Green Foot Printing” might flirt briefly with similar ideas, but one of the album’s more memorably obnoxious piano themes swerves interest far from the surrounding voices, putting focus instead on it and only it. Like much of the music he’s working in homage to, this record feels poorly-mixed at best, with virtually every instrument given equal prominence in the mix with no regard for their volume. As a consequence, the rare moments that could be taken as actual songs sound all the more demented, as does a song like “Dream On,” where an actual voice, singing a potentially memorable melody, is deliberately buried underneath a wall of piano chords and a relentless rhythm track that’s neither memorable nor particularly good, just loud, and almost certainly untreated in order to make the listening experience less pleasurable.

However, in its final stretches, Ferraro seems to take the aforementioned Windows startup and shutdown noises to their logical conclusion, transforming them into instrumentals Eno might’ve been willing to have been tangentially involved in at his collaborative peak, though this might be at least somewhat because Eno himself was responsible for the Windows 95 startup noise. “Condo Pets” sounds like the most organic composition here in spite of hollow, preset-manufactured drum sounds, with synth pads straight out of Hassell’s Fourth World albums and synth drones not totally removed from what Oneohtrix Point Never was exploring on last year’s excellent Returnal. “Solar Panel Smile” slows down and breaks apart a variety of Microsoft logoff tones (atop, of course, the background music that plays on the Nintendo Wii’s home screen), then reintroduces hideous percussion so as to derail whatever pleasure one might have taken from them.

In essence, Ferraro has crafted a noiseless noise record, a collection of meditations—on the future as it was once envisioned, the future we ended up actually getting, and the pronounced disconnect between the two—as jarring as they are hilarious. Though it’s nowhere near as viscerally unpleasant as, say, virtually any Merzbow recording, it’s every bit as likely to confuse and frighten bar patrons if it shows up as streamable on those internet jukeboxes where individuals can purchase things like Brian Eno’s “Thursday Afternoon”; this is by far Ferraro’s strangest, most memorable, and most out record yet.