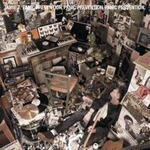 Panic Prevention is a carousing missive, egged out of snap ideas and hair-brained admixtures. It shimmies and sways, and generally does that increasingly arbitrary thing that only increasingly arbitrary pop records pull with any panache. It teases the charts, but also maps disparate musical contours into a cohesive and proliferating vision. It's not so much the clarion trumpeting ratchet-cry of a jaws-aghast "shit's life-transmogrifying!" debut, as the dry swing of a jesting upstart, part maverick, part mongrel and, um, all good.

But, wait up, says non-Anglophonic audience: Jamie T? Parlez-vous straight talk? Dude's songs may as well reek of dead squirrel, rung on a skinned cat and laid out smackdown in allegro, for all we care -- you've told us jack, and we want --

Details. Okay. Here are the details: Londoner, comes from Wimbledon. Coupla UK charting singles and a building buzz, universally summed up as "a kid" with "prodigious talent." The swarming contingent is big on the Mike Skinner comparisons, and not without some pointers -- half-rap takes in urban melodrama as from the kitchen sink, and the whole affair is thrown into the charming disarray of the half-assed "work in progress," sounds not so much found as dropping casually and perfectly into the all-encompassing environment of the record's twelve songs.

The difference is that he doesn't so much work the material as let his wavering diction be pulled apart by its freewheeling spirit. It's this evolutionary spin-cycle of the music itself that demands the listener's attention through the virtue of its subtleties, which smooth over and keep in check the irrepressible raucousness of its creator. Take opener "Brand New Bass Guitar," which begins, rather brilliantly, with the petulant cry "Fookin' Cro-sant!," before a cyclical riff played on an acoustic bass attempts an even keel, before losing itself to the humanly faltering rhythms. And that's before the choir comes in, going through enough harmonic reaches to make Danielson blush and lose his innocence, before giving in and calling it a day, because, well, there's only so much one can say about a brand new bass guitar. Making it a clever little pop ditty is another gold star entirely.

A melodic minefield is raided throughout Panic Prevention with startling consistency, running the gamut from the leapfrogging pogo disco of "Salvador" to the kettledrum maudlin pop of "Calm Down Dearest." Like the opener would suggest, almost every nuanced development is borne out of the primordial ooze of beat and bass, both of which move through manipulations whose lackadaisical slump and chaotic rumble accurately reflect the emotional range of the lyrics. "Calm Down Dearest" opens with drawn out keyboards and arrhythmia, its spotty rhythm eventually coalescing into a kind of logical inebriation, inhabited by stinging strings and puff-chested propulsion.

Likewise, the lyrics effortlessly emanate all kinds of moods, sometimes taking on jingle advice, as on the Clash-inspired reggae-rock of "If You Got the Money," or anthemic sloganizing, which "Operation" prefigures into a post-punk melange of darting guitar and chopped snare. It's also the record's worst song, but whatever. Most exciting is the raconteur's (not Raconteurs) flair Jamie flouts on closer "Alicia Quays" and "Sheila," whose opening verse doesn't so much set the scene as unravel a gradual conglomeration of action and detail: 'Sheila goes out with her mate Stella / It gets poured all over her fella / 'Cos she says, man, he ain't no better / Than the next man kickin' a fuss/ Drunk, she stumbles down by a river / Screamed calling London / None of us heard her comin' / I guess the carpet weren't rolled out."

The very consistency that reigns in the bipolarities of the record, though, is the feature that ultimately exhausts and undermines the relative quality of the songwriting. As a mark of insane talent, it's faultless, but what needs to be nurtured on future albums is an element of restraint, and some facet of tighter control over the various goings-on that densely pile up in each song, and threaten to competitively choke each other. Most tracks tread the line remarkably well, but, inevitably, there are those where either the core idea doesn't float (the peppy, Gameboy-inspired keyboards and sampled bureaucracy of "So Lonely Was The Ballad") or where the central beat is bogged down by extraneous and unnecessary sound effects ("Dry Off Your Cheeks"). Ultimately, what we have for now in Panic Prevention is no classic, but a wonderful testament to intuition, which boisterously, and rightfully, posits Jamie T in that rare class of pioneering artist, one who has created a piece of work to stand with any of the other notable records released so far this year.