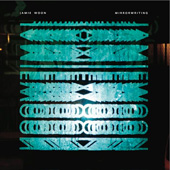 Adele might have gone seven times platinum but that doesn’t mean another graduate of the London School of Performing Arts & Technology can’t have a stab at the charts. Jamie Woon picked up his ribbon four years ago, known now to those from his classes as the sole explorer of that strange, uncharted hinterland that lies somewhere between Burial and Lionel Richie—with a voice as silky as Roland Gift’s, he cloaks himself in electronica and knows his way around the capital like a pizza boy. Already touted by the BBC as one of The Sounds of 2011, Woon’s camouflaged his blips and reclusiveness as a twelve-track, 50-minute pop record, revving up interest among younger listeners with his eyebrows, R&B grooves, and pea coat. Mirrorwriting delivers on all three of these fronts, plus several more cerebral ones, and shows that looking Celtic, graduating BRIT School, and being the son of a former backing singer only help bring out a talent that already could have earned him session work for life.

If you haven’t been on YouTube in the last two months, Woon’s sound can be recognised by its dusky electronics and harmonies about shyness. By the time he hits “Street” and its beat lifted from Blur’s “Girls and Boys,” it’s obvious Woon’s evolved his own idea of Britpop, moving the focus from nasty blisters/battery thinkers to bemoaning the lack of public benches: “Walking and walking, thinking on my feet / Anything can happen in the city but you can’t sit down / Building to building, sheltering from the sky / Knowing there’s somebody on the street who can change my life.” The synth-horn choruses are about as boisterous as things get, the smooth verses ideal for torturing yourself as you slug sans soulmate down the Tottenham Court Road. The magic of this and the majority of Woon’s work lies in its blend of dubstep particles with soul licks, the end result set to a coffee table tempo. Don’t expect tracks like “Spiral” to tear up dancefloors this summer; it’s Mirrorwriting‘s answer to the tween track, mixing beats, acoustic guitar, and synth lullaby. You can practically hear Woon adjust the hair against his forehead as he confesses his phobias to the skies. Singletons, block up your ears now.

Woon’s romantics arrive with a sting, however, and for every “Waterfront,” with its hypnotic goodbyes, you get spooked-out, potential R&B singles. Woon doesn’t just wander outside closed clubs with a voice too good for the party, sometimes he ventures into them, coming out with traces of their energy, which he rubs into hits like “Lady Luck.” A firm entry for Earworm 2011, the track’s sass and grime chords have already had radio attention, allowing Woon to introduce himself with his highest falsetto yet. “And it ain’t something you can synthesize / And it ain’t something you can buy / Ain’t got nothing to do with wrong and right / Got everything to do with time / Lady Luck don’t let me down,” he wails, possibly referencing his predicted chart impact given the hype he’s now riding. There’s equal swagger on “Middle,” which shows the singer at his lively best, due to having momentarily fallen in love. He still uses an elegant string section to add spice to the drums, but there’s the feeling that his voice/the bass are only just holding back the full chamber orchestra, all of whose fifty members want desperately to fight him for the mic.

Mirrorwriting‘s greatest asset—more so than Woon’s formidable vocals—is its author’s ear for selecting the right production to go with them, pushing his otherwise well-worn brand of pop into interesting new territory. Any respectable manager would have him shirtless and learning dance steps before he’s even made it to wardrobe, but Woon’s writing gently reminds us he’s more than Justin Bieber for Americano drinkers. He might even be the best male singer the UK’s produced this year, opting to sing calmly about optical illusions dancing around his lover’s head than trying to find words which rhyme with emotion.

And though the aquatic molecules of “Secondbreath” are about as close to cutting edge as Mirrorwriting gets, it’s still an original and high-calibre debut, as likely to be played in pimped-up car systems as it is in the bedrooms of stamp-collectors. Woon’s educated and well-researched yearnings might be more clairvoyant than he thinks, because if you like soft, echoing pop music that plays while you gaze over the city—and apparently, a lot of people do—you may have chanced on your record of the year. If you don’t, you’re going to be hearing a lot more of this youngster anyway, so you may as well sit back and re-listen and then think, “Fuck—that voice comes from Clapton?”