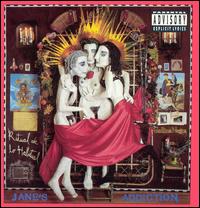 Yo For something I’d like reviewed, possibly Jane’s Addiction’s “Ritual De Lo Habitual”. I don’t really know what the sort of indie-critic’s opinion of the album is. Not that I’d care, because I will always love this album. I guess its just sort of out of curiosity.

Did all y’all know that Perry Farrell wrote, directed, and starred in a movie entitled “Gift”? Out of print for ages, and released maybe two years after the record from which this review draws its inspiration, “Gift” intersperses live studio footage with a minimal plot revolving around Farrell and his relationship with alluring goth-chick (and muse) Casey Niccoli. A cautionary tale of sorts for young Janes’ fans/would be heroin users, Niccoli OD’s about 25 minutes in; Farrell subsequently takes a shower with her dead body, and the whole thing ends with a live clip of Jane’s Addiction trading licks with Ice-T’s Body Count for a spirited rendition of Sly Stone’s “Don’t Call Me Nigger, Whitey.” My version came with 45 minutes of Faith No More’s Live at Brixton Academy tacked on at the end. My high school friends and I quoted “Gift” endlessly (e.g. “When you get the drugs, put them in your mouth!”).

And yet “Gift” doesn’t even begin to approach the levels of self-indulgence inherent in Ritual de Lo Habitual, still the ultimate Farrell document, and easily one of the greatest mainstream rock records to be released in that somewhat blank year known as 1990. Seriously, what the hell happened in 1990? Nirvana wouldn’t break until a year later, Axl had yet to use his illusions, and all I can really recall is listening to Digital Underground’s Sex Packets on repeat at summer camp in the Berkshires. Come to think of it, Poison had a hit with “Unskinny Bop” that year.

Ritual didn’t really blow up until 1991 anyway, helped in no small part by the endlessly rotated, grocery store-based video for “Been Caught Stealing.” The latter would actually go on to win a moon-man for Best Alternative video, leading to a drugged up Casey Niccoli accepting the award on Farrell’s behalf, followed by an equally drugged up Dave Navarro proceeding to kiss her on the mouth.

That song, “Ain’t No Right” and ultimate extreme sports anthem “Stop!” comprised the three fine singles for which Ritual is best known, but they only begin to scratch the surface of Perry Farrell’s ambitions. The latter is nowadays less than scary; essentially a loopy old uncle type with a wife and kid who studies the Torah daily and sometimes spins as “DJ Peretz.” But at his band’s artistic peak, Farrell was a force to be reckoned with. Maybe like Wayne Coyne on the H as opposed to LSD, Farrell was equal parts wiry shaman and entrepreneurial huckster; ingenious enough to bring Lollapalooza to the masses, but hardly above writing eleven-minute rock songs insinuating that Jesus had wings and liked to indulge in a good three-way now and then (“Three Days”).

Such an imagination might have somehow allowed Perry Farrell to emerge as a 1990’s cult hero even if the musicians he surrounded himself with didn’t completely kick ass, but it certainly didn’t hurt. Eric Avery (a/k/a Eric A.) could be in the witness protection plan now for what anybody knows, but he remains one of my favorite bass players to this day. His perfectly mixed basslines constantly drive every song, but never devolve into the Claypool-like displays of showmanship that were common for the era. Drummer Stephen Perkins is more than capable of meeting Avery’s challenge, and while it’s next to impossible to imagine now, there once was a time when the name Dave Navarro actually conjured up images of incredible guitar solos instead of a fading goth-rock wannabe last seen hosting a reality show to crown the new singer for INXS (really, has anybody in the history of modern rock fallen off as nearly as hard as dear old Dave?).

The substantially quieter “Then She Did” spends eight minutes dealing with the suicide of Farrell’s mother, and startles the listener when Navarro’s melodic guitar patterns erupt into a wall of feedback highlighted by Perkins’ crashing drums and insistent keyboards. Your bubbe will surely identify the fiddle and clarinet flourishes on “Of Course” as clearly having their roots in klezmer music, and the vaguely shoegazer-ish “Classic Girl” ends the proceedings on a wistful note, and also serves as fantastic background music to the scene in “Gift” where Perry and Casey are being married in Mexico by a Santeria priest.

Being of the not unreasonable belief that most bands only have three good records within them, Farrell splintered Janes Addiction at the height of their popularity in 1992, only to have them regroup minus Eric Avery a few years later for some “relapse” gigs and 2003’s hardly embarrassing, but inessential Strays. And while it can be argued that 1988’s Nothing’s Shocking might even be a little better than Ritual, what’s not up for debate is that neither Farrell, nor any of his bandmates, would begin to come close to achieving this level of quality ever again (Porno For Pyros? Deconstruction?). You listen to Ritual de lo Habitual for the endless virtuosity of Dave Navarro’s guitar solos (legitimate technical skill being soooo 1990), the DNA-coil tightness of the rhythm section, and Farrell’s surrealist, often politically charged lyrics; delivered in an androgynous screech more akin to a creature than an actual human being. Too intelligent to be lumped in with L.A. hair metal, but far too technically adept to have any association with punk rock or the forthcoming Seattle bands; fifteen years down the line, Ritual de lo Habitual has aged extremely well.