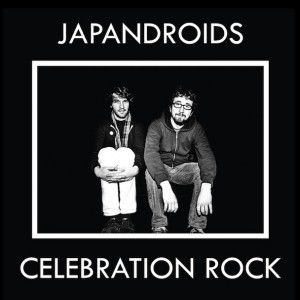 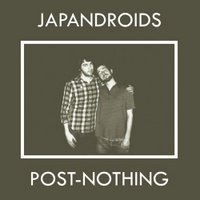 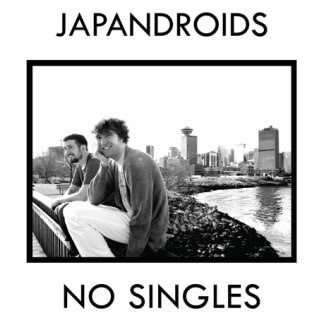 Because Japandroids are such a likable band, and because having to follow-up on the promise of a debut LP as blogospherically hyped as Post-Nothing (2009) is never an enviable task, I’ve rarely been as concerned about the potential failure or success of an album as I continue to be about this band’s still-forthcoming second. It’s just that their debut was so wide-eyed, so raucously and joyously hopeful, that their possible destinations—wearing themselves thin with a retread, maybe, or hiring star production talent and over-extending themselves—are pitfalls I want them to avoid so badly. Given that Japandroids have opted to spend 2010 releasing a steady stream of new 7” singles instead of a proper LP, it seems they’re greeting future endeavors with some trepidation of their own. So in lieu of a follow-up, here we have No Singles, Polyvinyl’s premium compilation of two early and out-of-print EPs. This release is something of a marketable safe-bet: Japandroids can justify further touring by getting thrown back into the indie-public consciousness for another fifteen minutes, but because this isn’t new material even negative reviews necessarily re-qualify Post-Nothing as a comparative improvement, meaning the band still comes out unscathed. Labels and bands and PR people love this sort of thing because they get a new product without new material consequences — so even though No Singles isn’t especially good this review serves to remind you that Japandroids are still intensely likable and Post-Nothing is still great.

How No Singles ends up functioning is pretty much exactly how these sorts of retrospective re-releases implicitly promise they will: the two five-song EPs which make up the release, 2007’s All Lies and 2008’s Lullaby Death Jams, show Japandroids stumbling through relative infancy. What that means is that No Singles sounds more or less like last year’s Post-Nothing, only slighter, or a little less sure of itself. Which, again, is what I suspect to be the core of this album’s appeal: it satisfies the desires of fans eager for more unheard Japandroids material, but, more than that, it lends Post-Nothing and the band in general some much-needed biographical context. It fleshes out the back story of a band nobody knew anything about before last Spring, which makes them seem more developed—suddenly they’re a band with a history, not nobodies riding the success of a one-off fluke.

That context is certainly interesting—it’s pretty neat to hear Japandroids in their formative stages. But it’s like the Star Wars prequels: I may be compelled to learn about the origins of something I like, but there’s no guarantee that the origins themselves will be compelling. No Singles doesn’t quite hit Jar-Jar lows but its highs (opener “Darkness At The Edge Of Gastown” is certainly up there) still fall short of the standard set by even the weakest Post-Nothing material. And so as a whole No Singles succeeds but also doesn’t: in presenting a snapshot of a band before they’ve reached their potential, this record does precisely what it sets out to do. But, beyond the narrow satisfaction found in glimpsing that potential, there’s not a great deal here that’s appealing.

Which isn’t to say that No Singles is bad, exactly, but what this album does well Post-Nothing does better. For me, that record’s appeal lay mainly in its submission to youthful vigor, the way the hypermasculinity of guitar heroics were undermined by a kind of childlike wonderment at yelling over loud guitars. And it was endearing; there was no posturing, no winking, no cool irony. But it’s a mistake to believe that their innocence isn’t cultivated; the looseness of No Singles should drive that point home. Think about the steady build toward the refrain at the end of “Heartsweats” and see if you can find anything here that even comes close to such coherency and composure—nothing comes together so well. Instead we get songs that plod and meander, boring by-the-numbers stuff like “Sexual Aerosol” and “Coma Complacency,” which for a band built around rocking the fuck out seems fundamentally wrong. It’s no surprise that the band sound their best while tearing through a cover of Mclusky’s “To Hell With Good Intentions” because it’s the one song here where the caliber of songwriting matches the quality of their delivery.

I’ve seen Japandroids play live three times now, and each time the band has played Post-Nothing material almost exclusively. “Darkness At The Edge Of Gastown” and that Mclusky cover are the only two tracks here that have persisted as live staples, and, unsurprisingly, those are this album’s stand-out songs. Which brings me to exactly the qualification I knew I’d be making from the beginning: No Singles reveals Japandroids as a band that has vastly improved since the release of those early EPs. And while you can’t exactly fault the band for having gotten better, neither does it seem fair to laud their humble beginnings on the grounds that they’re vaguely illuminating. This release is just a stopgap, a fake-out before we get to see what the Japandroids are capable of now that the pressure’s on. Let’s hope they keep improving.