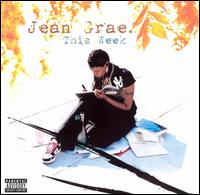 Chances are you know Jean. Even if you didn’t lay down the $15 for her phenomenal Attack of the Attacking Things (2002) album (or the follow-up full-length Bootleg of the Bootleg EP), you’ve heard her sharp, quick spitting all over the place for the last few years. In the process of securing her crown as the cameo queen, Grae has laid down some of the best verses on the most recent records by Talib Kweli, Diverse, and the Roots.

Declaring her the best female MC is something of a foregone conclusion; her competition really doesn’t stand much of a chance. As Attack of the Attacking Things proved, Grae’s flow is a vicious, biting mix of extreme literacy and emotional wreckage. She can spit faster and smarter than most MCs, male or female, and has the New York rap swagger in her blood.

So, what does the most promising MC in the underground do for her breakthrough record? That’s right: concept album. This Week, Grae’s sophomore release, loosely follows Grae over the course of a week. In theory this would be a great concept for Grae, but it doesn’t translate quite as well to the record; a few of the tracks end up feeling a bit empty, and the album as a whole has a bit too much filler. While Attack saw Grae taking on a slew of characters (most notably the stereotypical player on the great “God’s Gift”), here she is just Jean Grae. If anything this makes her even harder.

Grae’s earlier releases have been held back by mediocre production, and though she manages to do a bit better for This Week, the beats can still get a bit dull. The tracks produced by Midi Mafia and 9th Wonder are pretty hot, but too often the other tracks are marked by simple loops and drum tracks that felt stale years ago. Of course, with Grae it all comes back to the rapping. In this respect she has never sounded better. She can still squeeze far too many words into one line, but she also steps back and takes it a bit slower on a few tracks, which serves her well.

Grae gets things kicking with “A-Alikes,” spitting fast with a quite-literally biblical anger over a far-too basic beat. “Going Crazy” rides a better beat, and Grae’s paranoid spitting works pretty well, especially in the later verses, even if the whole premise feels a bit hokey. The club-banger “Style Wars” feels a bit out of place, but if it catches on, I’ll eat my words.

The album really picks up speed in its middle third. Although she has to work with another indistinguished beat, Grae spits long and quick for “Not Like Me.” Then, Grae slows down her pace a bit on "Supa Luv" as 9th Wonder delivers an absolutely huge beat---9th works in two or three soul samples on a killer loop. There is a rumored 9th Wonder/Jean Grae album (alá Murs’ 3:16, released last year) titled Jeanius that was written and recorded over the course of five days which may be released later this fall. If “Supa Luv” is any indication, Jeanius stands a chance of upstaging This Week.

“Whatever” is a return to the hard-as-nails side of Grae’s persona, and “The Wall” continues with the dark beats.Midi Mafia’s production on “You Don’t Want It” goes for the typically bass-heavy, and it doesn’t fit all that well with Grae’s flow. The neo-soul flares of cracking call-to-arms "Watch Me" work well while “P.S.” is the best narrative track of the album, harking back to Attack’s raw “Love Song.” The two bonus tracks on the album, “Fyre Blazer” and “Don’t Rush Me,” both ride better beats than most of the album tracks. The off-beat drumming on “Fyre Blazer” matches the piano loop and Grae’s dark verses, and the beat breaks on the 9th Wonder-produced “Don’t Rush Me” give Grae yet another chance to show off her skills on the mic.

In the end, This Week suffers largely from the hype---there’s no way this album could be as good as it was supposed to be. All the same, it’s a step forward from Attack, and given some more time, some decent production, and hopefully the help of the dozen or so great rappers that owe her, Grae could easily outdo this album. In the meantime I’m looking forward to Jeanius and the prospect of Grae continuing to upstage rappers on their own albums for years to come.