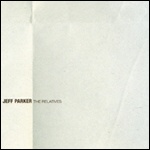 It’s been just under a year since I horribly overrated Tortoise’s It’s All Around You. Driven by nostalgia for my innocent college days, coupled with the fact that Chicago’s finest hadn’t released an album in nearly four years, I gave it an 87% (you can read the entire thing here). Only after stepping back from my Tortoise immersion did I realize that the album was actually quite dull; enough so that I can’t say I’ve listened to It’s All Around You more than twice since I had to write about it. This was hardly the fault of Tortoise guitarist/de facto frontman Jeff Parker, as his guitar licks were as melodic as ever, but rather that the album as a whole failed to sustain any sort of forward momentum outside of its first three songs. Unless you’re up for reading a self-indulgent tale of my youthful, college man naiveté in New Brunswick, New Jersey (and who wouldn’t be?), feel free to disregard my Tortoise review entirely.

I bought Jeff Parker’s new solo album not because I’d been waiting for it with baited breath, but rather because I needed something to write about, and January is generally a crap month for new music. Heck, I didn’t even realize he had a solo disc in the works until I saw it on the "new release" portion of the rack. So call this one a pleasant surprise. Bearing little resemblance to Tortoise’s expansive post-rock, or even Parker’s faux-electric Miles wankery with Isotope 217, The Relatives is simply a fine collection of straight-up jazz guitar songs: far more traditionalist than what we’ve come to expect from Thrill Jockey label, but no less high in quality.

Despite being billed as Parker’s album, The Relatives is clearly a diplomatic effort as he only gets songwriting credit on three of its eight tracks, and there’s as much focus on Sam Barsheshet’s frequent Fender Rhodes solos and Chris Lopes’ acoustic basslines as Parker’s licks (typically excellent John McEntire production, too). In contrast to Tortoise’s skronkier moments, Parker’s tone is relatively clean throughout, often reminiscent of the late Hungarian jazz guitarist Gabor Szabo. While it’s unquestionable that he’s got “chops out the earhole” (Downbeat Magazine’s quote, not mine), Parker’s soloing seldom overwhelms the song, and when he does choose to show off, like in the last two minutes of his swingin’ instrumental cover of the Here, My Dear-era Marvin Gaye tune “When Did You Stop Loving Me, When Did I Stop Loving You,” he kicks enough ass to warrant a clearly audible “yeah!” from drummer Chad Taylor.

The title song is somewhat reminiscent of an Isotope 217 track (not for nothing that it was co-written with Isotope bassist Matthew Lux), but practically every other song on The Relatives is rooted in the melodic guitar jazz of the late '60s; Wes Montgomery’s legendary Verve sessions with organist Jimmy Smith being a distinct reference point. The piping hot “Mannerisms” even does the latter one better; at times sounding not unlike a cheerier take on the second half of Miles Davis’s In a Silent Way suite. A quality jazz guitar record that never once threatens to enter the realm of “smooth,” I’d recommend The Relatives to all fans of Parker’s prior work, as well as anybody who enjoys the genre, yet is, like myself, too frightened to purchase any jazz albums released after 1972.