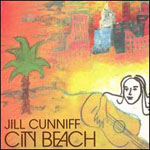 “Ugh, the lyrics and beat make this sound like American Life-era Madonna!” So sayeth my girlfriend, Jessica, about “Love is a Luxury,” a song smack dab in the middle of the new Jill Cunniff album, and ouch. But, if there’s anyone truly qualified to talk smack about the former Luscious Jackson front woman, it’s Jessica, a card carrying Luscious Jackson superfan who, I can tell you firsthand, probably owns more bizarre LJ CD singles and promotional vinyl than the band members themselves. This is the same woman, I’m told, who nearly fainted from excitement when she saw drummer Kate Schellenbach walking her dog in New York City’s West Village a few years ago. In other words, when Jessica’s comparing Jill Cunniff to Che Guevara-addled Maddie, something’s seriously amiss. Yours Truly was a Luscious Jackson fan long before he started dating the aforementioned female (Jessica, not Madonna). I purchased their records based off of the heavy rotation their sultry videos received on 120 Minutes, in addition to the fact that for most of the latter half of the 1990’s, the Grand Royal record label was the arbiter of cool. Luscious Jackson was the first signing to The Beastie Boys’ imprint, and with the lo-fi, beat intensive mélange of funk and hip-hop evoking downtown panache at least six years before the same would become synonymous with Julian Casablancas, it’s easy to see how the band would have a fan in Mike D. Plus, drummer Kate Schellenbach was momentarily a Beasties member during their inept hardcore era. Twin front women Jill Cunniff (high pitched, melodic vocals) and Gabby Glaser (low pitched, streetwise vocals) were never the smoothest of MCs, and I was never entirely convinced that they were always playing their instruments (guitar and bass, respectively). Still, such was their ramshackle charm. They also had a number of great songs, their strengths held in slow burners like “Deep Shag” and “City Song,” both from the excellent Natural Ingredients (1994) and both ideal for headphones on sticky summer days or for contemplative strutting through New York City. And of course there’s “Daughters of the KAOS”, the ultimate 90’s female gangsta anthem, appallingly, criminally left off the recent LJ hits compilation. Then, by 1999 they’d lost keyboardist Vivian Trimble, and that year’s Electric Honey portrayed a Luscious Jackson sacrificing much of their New York flava in favor of meandering power pop and overly shiny production. Cunniff’s vocals sounded as good as ever singing the choruses, but the record reeked of commercial grasping. Her band called it a day in the spring of 2000.

It’s no surprise that Jill Cunniff is the first member of Luscious Jackson to officially go solo. She wrote the lions' share of their songs, sang nearly all of their choruses, and was the brains behind "Kostars" -- by far the most fully realized of the seventeen or so Lusicious Jackson side projects. It is a surprise, though, it took her seven years to make it here. Supposedly something of a tribute to Coney Island, City Beach -- or, at least half of it -- makes good on Luscious Jackson’s trademark of hazy, proudly laid back funk stressing atmosphere over groove (and is the better for it). Indeed, Cunniff’s M.O. is spelled out in the sun-splashed funk of lead track “Lazy Girls,” a pleasant tribute to doing nothing except lyin’ on the beach and “eating orange popsicles.” “NYC Boy” is the one track that sounds the most like classic Luscious Jackson, featuring an aggressive groove filled out by wah guitar and flute. But most of City Beach’s first six songs succeed on the strength of spacey beats that aren’t in a hurry to get anywhere, evocative of the better songs on Luscious Jackson’s “difficult” Daniel Lanois-produced third album, Fever In, Fever Out (1996).

When Cunniff tries her hand at writing full band pop-rock, though, shit gets dicey. Career nadir “Love is a Luxury” is every bit as horrendous as my girlfriend claims it to be. We’re talking sub-Liz Phair power pap with even worse lyrics, and the similar “Exclusive” doesn’t fare much better. Cunniff’s voice is placed far higher in the mix on the rock songs than on the more sample-based material of the album’s first half, and this fails to do her any favors, especially when she’s leading off with head slappers like, “What does it mean to have / Money to burn? / I bought it all / I lost it all / I didn’t learn!” “Kaleidoscope” seems tailor made for the more contemplative scenes in the forthcoming Sex and the City movie [“What hasn’t Rachel Yamagata touched lately?” -- Ed.], and the yell-along electro of “Future Call” concludes a highly questionable four song run with Cunniff’s shout-out to “Valley Boy, Repo Girl!” (sigh).

City Beach regains its footing (somewhat) on its final two songs, but by then it’s a bit too late: the relaxed good will of the album’s first side has already been obscured by the commercial dreck of the second. If Electric Honey proved anything, it’s that Cunniff really isn’t that adept at chugging pop-rock, meaning her lyrics are too trite, the arrangements too staid. I enjoy seeing her make music again, and she’s still plenty capable of bringing the funk when she plays to her strengths. Unfortunately, she only does so for half of City Beach, relegating her solo debut to little more than a curiosity for the Luscious Jackson hardcore.