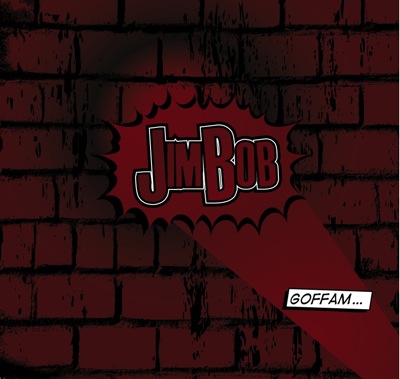 After seven solo albums and a former life in the charts, James Neil Morrison knows that sheep’s clothing is indeed the way forward. After all, what’s creepier than just being kidnapped? Being kidnapped by someone who perms you and polishes your shoes, of course. Equally creepy are these twelve merry fares about a city with an out-of-date Bat Signal trapped in a bubble of Kryptonite smog. Welcome to Goffam: a town drowning in Marvel films but desperately in need of heroes; a steel mill where Alex Murphy never becomes RoboCop—he just gets shot and shot and shot. Also, welcome to Goffam: Jim Bob’s eighth studio album and his most succinct release to date, the one where his senses of humour, temper, and melancholy align like something astrological.

Yes, it’s concept album time, and if you thought things were cruel through the growing pains of 2006’s School, you’d better suit up for Goffam‘s grisly chronicles—all rampant knife crime and grumbling hordes. “This town needs an enema,” as Jack Nicholson would remark, and he’s right. You see, Goffam’s mean streets are too dank for De Niro, too hell-bound for the Angels in America. At thirty-six minutes they’re also bustling with life and decay—there isn’t even enough time for the traditional Jim Bob opening skit before we lurch straight into the opening pitch. “The Golden Years of Lonely Old Dears” is a sombre and jarring piano hymn for today’s broken elderly whose titular golden years are now more depressing than The Man Who Fell to Earth (1976) thanks to rising gas prices and gangs. Once Jim has sung his piece about “One bar, one bar of gold / Enough to thaw my old bones out some more / I did not survive a war / To die of cold,” the song erupts into speaker-eating fury, angry guitars clambering to shine light on a very real problem—so real, in fact, it got Margaret Haywood the gooner.

So don’t fall for that Adam West artwork on the front: this is Batman without Robin, Alfred, Superted or the Samaritans. However, what propels Goffam from a big black pit is Jim’s all-conquering rhythm and insight, adding a pop finesse to the record’s bleakest moments. When you’re whistling along to the banjo kicks of “Teenage Body Count”—an ode to city gun culture and recurrent child stabbings—you can’t help but a feel a twinge of guilt. It’s true these are terrible times we’re living in, so what’s keeping our Clark Kents from changing? Make with the phone box and fly already. Perhaps they’re too downcast like the boys in blue, one of which is given a platform to mourn on the campfire croon of “Lonely Cop”: “Last night I phoned a takeaway / Just to talk about the day I’d had / I’m parked outside the doughnut shop / I’m just another lonely cop.” The city is buckling under the weight of its grief while Clockwork Orange kids run amok. Still, those who know him will know Jim’s bleaker stuff is his best, and he’s got a wealth of ace cards and sleeves to fall back on when having a good grump at the world. It’s his steady juxtaposing of sheer terror with prairie twinkles and gonzo rock that marks Goffam as his possible best, though, from the cante flamenco of “Support the Goffam Cops” (Right Wing Jim? No—just doing his bit for the bobbies) through to the final lullaby of “Not Far From Here,” whose angelic and mild-mannered folk goes to show it only takes a hint of sun to chase the clouds away. Still, the familiar howl of the hidden track keeps a dark edge to the silver lining and lets us all know precisely what to expect once the sky once again goes dark.

Scary, eh. If it weren’t for numbers like “Architect Architect” you’d be indoors with the lonely old dears too, but for every downright dip into Hell there’re ninety seconds of cheeky fun to enjoy. As Jim politely cusses the creator of his flatblock while wet-rot and squatters run rampant, the essence of Goffam hits you: it’s not about surviving, but keeping optimism aglow while everything around you turns to fuck and drudgery. It might go down like a one-legged tap-dancer come the bunting and rhetoric of the 2012 Olympics, but it puts a wax seal on Jim’s way of thinking: more messed up than a sniper with shell-shock but as spiky and bright as the Red Devils. To the Bee Mobile! You mean your Chevy? ...Yes.