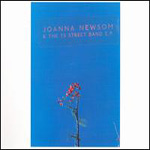 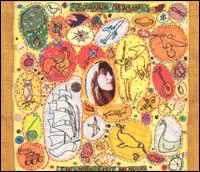 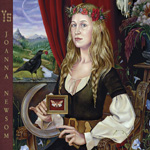 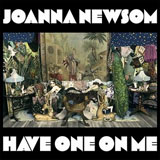 Have One On Me

For all the outlandish moments and reckless indulgences filed away in the  idiosyncratic history of pop music, there has never been a release quite like Joanna Newsom’s Have One On Me. As a three-disc, three-LP collection of two hours’ worth of new studio recordings, it joins a select crowd: most notably, the first triple LP album, George Harrison’s All Things Must Pass (1970); the Clash’s landmark Sandinista! (1980); and in the CD era, where those previous releases were distilled to two discs, Prince’s 1998 3-CD opus Emancipation (released to escape a record deal); the Magnetic Fields’ conceptual 69 Love Songs (1999, gimmicky at worst and maddeningly inconsistent at best) and Magnolia Electric Co.’s four-disc Sojourner collection (a 2007 compilation of several years of unreleased sessions). Even Harrison’s uniformly excellent album padded its two hours with a side of jamming. Among these, Newsom’s opus is arguably the only three-disc pop album ever to be released without obvious ulterior motives—other than sheer ambition—as the product of a singular artistic vision.

Hasn’t she been ambitious enough? Newsom’s last album, 2006’s Ys, was one of that year’s most audacious records—an hour-long epic that’s shortest song was a tolerance-stretching 7 minutes. Not to mention that hour’s content: harp ballads devoted to Aesop-style fables sung by Lisa Simpson’s weird older sister. The presence of Van Dyke Parks (Brian Wilson) arrangements, as well as production and mixing from Steve Albini (the Pixies, every good Chicago band) and Jim O’Rourke (Wilco, Sonic Youth) added pedigree, but had Newsom not risen spectacularly to the occasion, Ys could’ve earned a Guinness World Record for sophomore slumps. Rise she did, though, and it seems that that effort only whetted her appetite for sprawl.

As with Ys’ eye-popping track lengths, the sheer size of Have One On Me is the album’s most prominent attribute. It’s one worth considering. Like recent extra-long-players such as Ryan Adams’ Cold Roses (2005) or the Flaming Lips’ Embryonic (2009) before it, there’s no physical need for these songs to be spread over so many discs—its two hours would’ve fit snugly on two, or even pared down from 120-ish minutes to 80 and stuffed into one CD. There are at least three good reasons to release a three-disc album of studio-recorded, non-greatest hit-y songs: the price tag, for one; dividing the material for artistic purposes, for two; and finally, for the flat-out fuck-you audaciousness of it. Newsom’s three discs may be the indie equivalent of Lady Gaga’s hair helmets. Have One On Me is likely a product of a combination of the three, though all things considered, the money issue is likely more a question of, “Are the fans devoted and hungry enough to shell out for this in one go?” vs. “We’re going to make so much fucking dough.” (A long series of negative answers to the first question is almost certainly why Adams, for one, has not released another five albums.)

The material itself makes it hard to argue that artistry isn’t Newsom’s first priority—so how does the decision to go epic effect hers? Doubling or tripling an album tends to be a warning—even the Beatles’ White Album, one of the best albums ever made, has at least four terrible songs. But song for song, Have One On Me is a miraculously consistent release. Across its two hours, she cuts her widest swath yet, marrying the stark, enigmatic folk of her flawless sophomore release to earthier arrangements and surprisingly intimate narratives. When the music is of this caliber, she and longtime label Drag City must have reasoned, why hold it back? Some songs are better than others, of course, and a trimmed-down hour of the best stuff—Have Some CliffsNotes On Me—would be almost embarrassingly breathtaking. I’m glad she didn’t. It’s more revelatory to hear an artist work without the limits imposed by the music industry and its accompanying technology over the last century—three-minute songs, 40-minute albums, regular release dates. This album has gestated for over three years, presumably since 2006’s Ys, and it’s the rare record that justifies the wait.

And yet, its format confuses. One can only judge it by its own imposed restrictions, and the three-disc split adds nothing to a listening experience that will either be broken into even shorter vinyl sides or stretched into iPods’ uninterrupted playlists; there are probably more people who will jam this on record players (or Renaissance Faires) than will ever listen to it on CD. With that in mind, why not do two discs—with the first, her new direction, the free-spirited ‘70s piano-pop of Joni Mitchell that appears as a new influence on the outstanding “Good Intentions Paving Company,” “Easy” and “Occident,” among others—and then on the second, the serene, harp-driven telegraphs from heaven of “’81” and “Esme” that she once reveled in on Ys? As it stands, the first disc and its multiple percussive outbursts is the biggest step forward and the album’s strongest stand-alone; the short, largely drum-free second disc seems to be the meditative, personal sequence; the third, a reconciliation of its predecessors. There does seem to be some internal logic: the second disc is mostly love songs, while the first offers a motif of sleep and the third centers around a character called Esme, who appears in the titular track and “Ribbon Bows.” “Does Not Suffice,” the mammoth set’s closer, bookends things cleverly with an echo of first-disc stand-out “Good Intentions Paving Company”’s melody.

With the curiosities of history and possible intention under consideration, I don’t mean to ignore the art itself. In all fairness, over the length of two hours, the sequencing hardly matters. Nor, really, do a number of the songs. The thing Have One On Me absolutely excels at is the creation of remarkable moments amid its rambling odes. As she began to showcase on the Ys Street Band EP and her exuberant recent tours, Newsom’s ear for arrangements (handled on this album by touring bandmate Ryan Francesconi) and her comfort at adding helping hands to her singing and harp-playing have grown tremendously. On songs such as the titular “Have One On Me” and “Kingfisher,” strings, brass and percussion swoop in and out, turning and dancing on Newsom’s dime, bridging the gap between classical music’s admirable formalism and rock’s visceral excitement. “Baby Birch,” an “Amazing Grace”-like hymnal, contains honest-to-God electric guitars.

Throughout, Newsom’s vocals—a sticking point for some, all American Idol watchers, I’m sure—are downright elegant, polished almost to a fault. The squeaks and quirks of her early days aren’t entirely absent, but they’re presented in the service of the songs’ personalities. At times, she attempts a newfound vibrato—not quite the powerhouse instrument of a Joan Baez or Joni Mitchell, but on confidence, Newsom is for once their equal. Mitchell’s influence (and what better influence to have?) seems to have struck Newsom especially strongly on this album, from her sudden use of piano over harp on many of the songs to her loose approach to pop structure in favor of emotional dynamism. “Soft as Chalk” borrows most directly from the Canadian songstress, along with the riveting “Good Intentions Paving Company,” a rollicking (by Newsom standards) post-Woodstock piano jam whose energy I wish she’d used more of these two hours matching.

Newsom’s musicianship may be sure-handed, but Mitchell’s apparent influence also extends to a set of emotionally bare lyrics. Have One On Me is possibly pop music’s longest-ever confessional record—and one of its most clever. Her words, even more so than the music beneath them, are a study in contrasts. On some songs, Newsom sings of romance with the wink of everyday knowing: in “Good Intentions Paving Company,” she references Stevie Wonder and compares opening a heart to opening a honey jar, but elsewhere, she turns unpredictably melodramatic. To close “Jackrabbits,” she repeats “I can / love you again / love you again / love you again” like a meditation chant—or a child’s wish. Elsewhere, she tempers her Earthly longings with matters of Biblical import. “The end is near,” she cautions on “On a Good Day,” and name-drops the garden of Eden in “’81”—as a place to throw garden parties. There’s a wryness to Newsom now that was never so evident before, an edge of humor that humanizes her flights of oft-criticized fancy and makes her personal narratives as rewarding as her more folkloric considerations.

Much of this review has sought after Newsom’s intent. Have One On Me is difficult to parse without it. Criticism’s purpose is to judge two things: first, how well an artist accomplishes his or her goals, and second, if those goals were worth the effort. Newsom’s goal with Have One On Me is not that of her multi-disc predecessors, a warning of indulgence or a grand statement of ambition. As the album(s) sink in, slowly, what she really seems to be driving at is patience—a quality younger audiences may be on the verge of losing entirely in the era of shuffling playlists and Twitter marathons, or worse, never learning. But the record’s considerable rewards require it: “In California,” for instance, builds to a string-swollen peak only after five beautiful but otherwise uneventful minutes. By releasing three discs, Newsom has given us an album on demand. You can listen to Have One On Me however you like: in one sitting, in three, or not at all. To choose the last would be a tragedy, although I’ll close this review with one T-Pain-sized caveat: Have One One Me, in all its unprecedented Tolkienian sprawl, may be a two-hour love letter to the guy who wrote fucking “Dick in a Box.” Someone more ambitious than I will have to take on the 1,700-word task of analyzing that one.