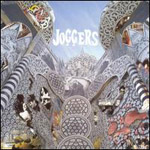 With a Cape and a Cane

I didn’t so much write off the Joggers after their debut album as shrug. Solid Guild was a decent album that had some slightly bizarre songwriting and interesting harmonizing; problem was, it came out during the post-punk-new-wave shit storm of 2003, and The Joggers got lost in the shuffle as a sort of off-key version of the Walkmen or a punchier French Kicks or a mellower Les Savy Fav. Listening to Solid Guildagain at the behest of fellow CMGer Chet Betz, he’s right to say the album ain’t too shabby. It’s a nice debut that was more a victim of timing than anything else.

Still, that doesn’t really prepare one for the leap the Joggers make here on album #2. With a Cape and a Cane sounds almost nothing like its predecessor; the songs ring a million times clearer and the hooks bite far harder. The Joggers lost a guitarist in between the two albums, resulting in a sparser, cleaner sound --- one that pulses with an aching heart and soul that's at least in part thanks to the break-down of songwriter and lead guitarist Ben Whitesides. Now, I'm not usually the kind to revel in another guy's misery, but if it results in an album this tight, well...

Whitesides and the rest of the Joggers have come out the other side of whatever downtimes they went through absolutely sparkling. With a Cape and a Cane bleeds and breathes with a sort of warmly stained melancholy and frustration that was buried too far beneath the surface on Solid Guild. “Ziggurat Traffic” opens the album as a sort of manifesto for the band’s new sound, with a nasty winding, knifing riff of plucked notes that’s rejoined by a meaty bass and restrained ratatat drumming. Whitesides’ spectacular guitar work on “Ziggurat” seems like it should be the high point for the album --- and indeed its epic detuned coda might be --- but thankfully there are plenty of moments to rival it.

“Era Prison” features an icy, stabbing riff plugged into a repeater as a filthier sub-riff howls below before both drop out and the mellower, chunky chorus comes in. The Joggers rock with the restrained cool of Is This It-era Strokes, despite the band’s Portland roots, but as “Era Prison” demonstrates they have a slightly more sophisticated understanding of songwriting than New York’s prettiest boys. And while the Strokes best songs always featured Nick and Albert trading riffs, in his best moments Whitesides’ guitar work is infinitely more interesting. As a vocalist, Whitesides is clearly aiming somewhere between the slightly unintelligible slurred delivery of Julian Casablancas and the earnest cool of the Walkmen's Hamilton Leithauser. It occasionally holds the songs back, but it’s to his credit that his pipes suit so many of the songs perfectly; and, thankfully, the rest of the Joggers still occasionally use the harmonizing that littered Solid Guild to good effect.

Its early standouts withstanding, the heart of the album resides in the fantastic one-two punch of the epic “White Madam” and the heartrending “Night of the Horsepills.” Featuring yet another winning restrained riff that winds between pulsing bass, “White Madam” is a mini-epic buoyed by Jake Morris’ fantastic drumming. Whitesides’ guitar again starts ethereal and moves into a chunky groove and back again, it’s these constant changes in direction that lend his hooks their sizable weight. “Night of the Horsepills” starts as a restrained ballad that moves into a catastrophically ebullient chorus with the whole band singing,“I haven’t seen you now for years / I hear you stepping down each step / your body burning through a shuttered place.” Supposedly an ode to several lost girlfriends, the song is rife with a bitter melancholy and soulfulness that few bands performing in the post-punk/new-wave oeuvre can muster.

The album closes just as well as it begins. “Apache Figurines” is a stuttering, lulling ballad of sorts built on a back bone of rock steady drumming from Morris and restrained pulsing guitar from Whiteside.

Perhaps it really all does come down to timing in the music world. The Joggers shine in a genre that seemed dried out and used up towards the end of last year. Now, they stand as an example of what we all thought this music could evolve to a scant two years ago. Whitesides’ innovative guitar work, deceptive use of dynamics and the band’s use of harmonizing separate them from the rather stale pack of hipsters recycling the same five post-punk/new-wave records over and over again. With a Cape and a Cane is not a mindblowing album, but it is a very good/sometimes great one that gives hope that this genre may deliver on all the promise it seemed to brim with oh so recently, rather than the OC-ready mall-post-punk some of its “leaders” seem intent on shoveling our way these days. Rock on, Joggers.