Other Records by John Frusciante and Eric Klinghoffer 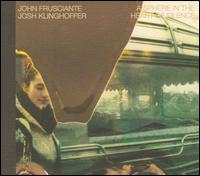 A Sphere in the Heart of Silence

At least six Frusciante releases this year (although, by the looks of it, six could be the promised number, unless John springs a holiday goodie on us---and wouldn’t that just be a candy cane in our nog?). A Sphere In The Heart of Silence is the fifth within six dedicated months, a collaboration between Frusciante and avante-electro-Mac Josh Klinghoffer. Although Klinghoffer has saddled many instrumental duties on Frusciante’s previous outputs for Record Collection---including joining Fugazi’s Joe Lally and Frusciante for Automatic Writing (2004), the first release from the engaging Ataxia---this collaboration is the first to feature songs penned and primarily performed by Klinghoffer.

So, this would be deemed Frusciante’s “electronic” foray, but these seven tracks attest to a Pepper that hasn’t sounded so comfortable since 2001’s To Record Only Water For Ten Days. Maybe prolificacy’s helped? All I know is that if the lead singer of my “main” band traipsed about on Conan sporting a smart ensem-bluh and hocking his new autobiography/grand name-drop, I damn well better have some good music stewing close at hand.

John, I willingly wind up my cynicism right here.

“Sphere,” unfortunately, is a devious introduction to a collection that culls most of its melodic and atmospheric prowess from amazing vocal performances. Drenched by Klinghoffer’s digital spring rain, Frusciante bows before puddles of white noise and holds a jittery libation to the guitar gods of Floyd. This makes sense when “The Afterglow’s” rapid drum loop breaks apart for a glorious falsetto; Frusciante launches into a drooling rockabilly guitar line and elastic bellow with the satisfaction of a pariah returning to the faith.

“Communique” and “At Your Enemies,” both headed by Klinghoffer’s milky adolescent voice, take heed from the album’s already-cemented precedent of echo heavy melodrama. The former, recorded in “real time,” is a chamber piece composed mostly of Klinghoffer’s vox and piano, Frusciante’s synthesizer storms the only pegs mercilessly clamped to the ground to keep Klinghoffer’s crooning in check. The latter, reminiscent of this year’s creeping Young Prayer (read CMG review here), is a watery tomb of drowned shadows and unintelligible moaning.

“Surrogate People” could very well be Heart’s centerpiece, a delicate acoustic arpeggio tip toeing from gothic new wave to Frusciante’s beautiful harmonies and back again. Compared to the subcutaneous hemorrhage of “Walls” or the aimless piddle of “Sphere,” “People” strips away the blips and scribbles of the album’s earlier electro-nebulae, honing piston beats and vocal treatment into delicate molds for Klinghoffer’s and Frusciante’s exchange.

“My Life,” consisting simply of Frusciante on piano, is an arresting conclusion, equal parts Leonard Cohen and Liberace, but its success is not in its lack of electronics. To fault an album for the very element upon which it is supposedly based eschews half the authorial equation and most of Frusciante’s industriousness. The obnoxious synthesizers of “Sphere,” “The Afterglow,” and “Walls” are more than made up for in their following five tracks of expertly constructed sound. The difference is in prominence: when Frusciante and Klinghoffer unleash equally startling monsters from their throat cavities, success follows those songs that don’t temper the beasts with comic-book-sized exclamations or clunking washes of organ.

One more LP is to follow—or, actually, has already followed---A Sphere In The Heart of Silence; December’s Curtains is a scheduled return to guitar/drum/bass standards, but don’t let that portend bad yule-tidings. If there’s one thing six albums can say, it’s that Frusciante’s tottering into a formidable artistic stride, and melodies to come will be as simple and grossly affecting as ever.