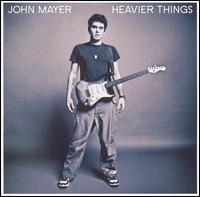 Hi there, Mr. Mayer - first off, may I call you John? 'Mr. Mayer' sounds like I'm an eight year old kid addressing a government official. Thanks, John. Anyways, I'm writing because I recently purchased a copy of your new album, Heavier Things. Now, I purchased the album without reading any reviews or hearing any tracks - not the smartest move, I know; however, it was relatively cheap ($10 U.S. dollars) and I was hoping to pop the disc into my discman and hear quality pop emerge from the promise I heard in your major label debut, Room For Squares.

My first question is this: why did you title the album Heavier Things? I guess it makes sense if you're referring to the electric guitar you're wearing on the cover and the requisite amp you (or your roadies) have to carry around to get a decent volume out of the thing. If, however, you meant the subjects and/or lyrics of the new songs, I don't quite understand. From what I can tell, you seem to be singing about the same stuff you were singing about on the last two albums - you know, how hard dating is, how love hurts, how you're lonely, etc. I mean, I guess those are good topics if you're pandering to the VH1 circuit, but don't you feel a bit cheap doing that?

Not that I want to be too harsh or down on you; like I said, I heard a few strong hints of pop songwriting talent on Room For Squares, and you're a fairly decent guitarist to boot. Heck, I even enjoyed your cover of Radiohead's 'Kid A' (if that is you - you know how songs have a tendency to become mislabeled when placed on the internet). I can't help but think that this album sounds like you're on auto-pilot; stick in a piano line instead of a guitar line, throw in a horn or two for good measure, and you've got a new sound. Why do some songs seem like Squares throw-aways with extra production work?

Ultimately, the most depressing idea is that you invited mediocrity into your latest work. An artist can be forgiven if he/she tries as much as possible and the end result is mediocre - I just can't shake the feeling that you settled on mediocrity when better work was within sight. Accidentally touching on bland material is forgivable; inviting it into your work is an atrocity.