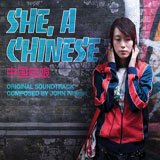 She, A Chinese OST

Once it’s robbed us all of a quid every week, the National Lottery does more than just pay for its controllers to cook up new incarnations of itself. One way it gives back is via the much-harangued Film Fund, which accords cash to would-be/fledgling directors to bring a bit of zeal to the screen: everything from skull-cracking Hollywood fodder to the proverbial bunch of gay cowboys eating pudding, if there happens to be any difference between the two. In conjunction with Warp X, the digital wing of the incendiary Warp Films (get ready for Four Lions), the Fund’s just helped Chinese ex-pat Xiaolu Guo turn her novel She, A Chinese into an indie. In it we meet protagonist Li Mei, a runaway from a viper-nest village who discovers the atmosphere in central London isn’t too dissimilar to the barren foothills from which she’s just hitched. An unusual way of trailing the 2008 Beijing Olympics, it’s a tight and kinetic little adventure that works hard to sidestep cliché; there isn’t even the customary Tank Man clip that the West likes to see in its Eastern vignettes.

Plotting almost as hard to keep the soundtrack fresh is multi-instrumentalist John Parish, whose score for the film offers a jagged view into China and its least likely emigrant. Best known for being the muscle on PJ Harvey albums, Parish brings in some rag-tag support to help beef out his eggshell guitar sketches: all-female Beijing rockers Hang on the Box deliver snark-leaden crunk on “There Is A City,” which opens like the Lost In Translation (2003) OST but then shakes into something more fizzy, and Parish augments this nicely with the sleazy toll of punk act Mumma, who you just know will be all over that bar scene like hawk-eyed cigarette continuity. These bursts help defibrillate the original cues that Parish has written for the film, informing the audience, with visceral clarity, that China is most definitely a country in flux.

The score itself is far too untamed to bring down the energy of Parish’s allies, and the dozen-plus themes he’s written for She feel culled from a warehouse of box sets, flipping moods as often as instruments. Parish’s pre-Harvey prowess could be heard in his first band Automatic Dlamini—who weren’t quite as addled on “world music” as their ’80s moniker would suggest—and he puts his travelled ears to good use here, occasionally flowering into the odd Cocteau migraine and using just enough banjo to stay interesting. Even the score’s first stereotype, “Li Mei Makes A Break,” will wrong-foot anyone who thinks it’s just a stereotype: all-too-familiar woodwind/paper lanterns get converted via rock riff into an twanging escape montage. JP really goes for broke with this particular track, plucking catgut like he’s holding centre-stage at a film fest.

Despite its rebelliousness, his score stays mostly warm, focusing hard on keeping Li Mei’s playlist every bit as unconventional as her character. For a girl who goes from prey of the hauliers to nunchuck holder to princess of extended Zone 1 it’s not right to have one theme looping, and Parish does a solid job of spicing the right points of the story at the right times and at mostly the right volumes. Swirling hypermarkets emit ambience and explode into greaser delight, with the only visible difference between the West and the East being one side likes to eat with chopsticks. Ident titles like “Spikey’s Death” and “Snake at the Docks” might imply some kind of Metal Gear Solid style mysticism, but She, A Chinese avoids the travelogue formulae by staying rooted in an earthy brand of realism (apart from on numbers like “Li Mei & Rachid,” whose bongos feel like lots of Hare Krishnas—with guns). I’d recommend trying to see the film before ploughing through all eighteen tracks in one sitting, as you won’t get the familiar A-to-B accompaniment of characters learning a lesson. What you will get, however, is a mix of latter-day Boards of Canada tracks stripped of their hip-hop swagger and some nicely downplayed snare work by Feist. Now what more could you want to go abroad with than that?