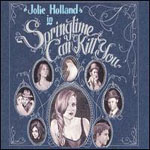 Springtime Can Kill You

I made the mistake of reading Jolie Holland’s Anti- bio before I listened to her music. Quoting from her liner notes of Springtime Can Kill You -- instead, perhaps, of presenting any information that might be useful to someone trying to learn about Holland -- the bio introduces Holland’s description of Springtime: “This baby is a picture of a lovesick, convoluted mind. Sometimes my voice is as a lusty young woman, sometimes an adoring friend, sometimes a tormented soul, sometimes a whispering ghost.” Something about the familiar, old-world tone of Holland’s notes rang false to me. Like, even people from Texas don’t actually talk like this, do they? “As a lusty young woman”? Is Holland herself this “lovesick, convoluted mind”? Is she an old blues song?

Springtime Can Kill You is Holland’s third solo release and her second on Anti-. She helped form the Vancouver band The Be Good Tanyas, contributed to their debut record, Blue Horse, then departed to San Francisco to start a solo career. In 2003, her basement tapes, Catalpa, were released, and 2004 brought her Anti- debut Escondida, which received much acclaim and earned her admiration from the likes of Tom Waits and Nick Cave.

I didn’t want to start off on the wrong foot with this album. I was going to like it; I knew I would. I like this kind of (bluegrass, country, jazz-y) thing. I love the Be Good Tanyas. Tom Waits is a fan, after all -- that must warrant something interesting.

Unfortunately, though, I’m bored halfway through the first song. Worse than bored -- irritated. What’s she doing with her voice? Why does she never sing a note straight? Her bio boasts that she’s a self-taught singer, and she does have a lovely voice. I loved it on Blue Horse and I’d really like to enjoy it now. But the warbling journey -- from the swing easy to the broken-down front porch on every lyric -- is a bit taxing. On top of the warbling, what’s with the accent? If English weren’t Holland’s first language it might be charming, but she’s from Texas. From the album’s opening, it’s pretty much impossible to decipher the lyrics because every word sung is an exercise in vowel contortion.

Okay, okay. I know I’m being mean. I get really annoyed when American reviewers talk about Canadian country singers and say, because they’re from Canada (which, in places, is just a little bit more “rural” and “country music” than they imagine) that their music just doesn’t feel “authentic” to them. So, whatever. If Holland wants to sing like she’s got an eastern European accent even though she’s Texan, who am I to rain on the parade? It’s a style thing. A matter of taste. Tom Waits digs it. That doesn’t discount the other things she has to offer, right?

Holland seems confident placing herself inside a mythology much older than her years. It’s this fact, along with her penchant for lyrics about crazy dreams and old-fashioned moonshine, that make many of her songs, though originals, sound borrowed from another era. She’s been compared to Billie Holiday, but the echoes of Fiona Apple (“Mehitabel’s Blues,” “Crazy Dreams”) are much louder. She does sound a lot, though, like Karen Dalton, an American singer, also compared to Holiday, who played the New York folk circuit alongside Bob Dylan and Fred Neil.

The best tracks on Springtime are the ones that defy comparison and sound the most felt (and the least like four a.m. pass-it-around-the-campfire jams -- not to mention any names, um, “Moonshiner”). The title track, a warning against staying indoors for the season, --“Get out of your house” -- features lilting vocals and understated piano and guitar lines that meld together effortlessly. “Mexican Blue” is a gorgeous tribute to a friend and features the album’s most vulnerable lyrics: “I'll remember all the dreams and mysteries / You have born in your crystalline soul / That you sing from your golden throat / That you shine from your sparkling eyes / That you feel from the goddess in your thighs / You're like a saint's song to me.” The song builds and builds but at the same time remains gentle and understated.

If this is what Holland sounded like all the time, I’d be on board. As if stands now, though, I’ll take Springtime one sultry, sleepy dose at a time. The same bio, when discussing the song “Springtime Can Kill You,” says this: “Holland, singing as if deceased, warns there’s no time to smell the roses.” The writer likely means that Holland sings from the perspective of someone who is no longer alive. Though unintended, for Springtime this description is a little too apt.