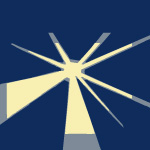 I hate song description more than I love puppies, which is a lot, but bear with me quickly: Everyday Shooter begins in twinkling solitude, a shimmering guitar figure repeated ad infinitum, a calm introductory core that is quickly rendered irrelevant by the swift-moving post-grunge riffage of the first proper track. This riff scissor-kicks, treading water, beneath a rising tide of supercilious guitar curlicues—“supercilious” being a sort-of apt term to describe all the twinging, tonging ephemera that eventually piles up, but not so supercilious that it doesn’t start drowning the riff below. That opening riff eventually ebbs up into robust choruses and foaming pustule downtime (and, inevitably, triumphantly back to that swift-moving post-grunge riffage) but never fully gulping enough fresh air or clambering out from all those twinging, torking guitar tones piling up overhead. And, as if unmoved by the desperation of the sounds at hand, the track fades out at this fever pitch, mission (murder) accomplished. This is how the first track goes. It’s also how the others go.

Well, up until the fifth one. There are three more after that, which may veer into trap-hop or fuzzy Earth doooom; I don’t know, because I haven’t heard them yet, and can’t really hear them (at least not yet), because I’m not good enough at killing shit. Killing shapes, that is. Okay: we’re talking about a videogame.

This is probably not the start of a trend. CMG will probably not start reviewing Atlus RPGs (although Mark would probably like to, nerd) because that’s not what we do. We review music. But Jonathan Mak’s creation points to a beguiling intersection between these media, one defiantly new and the other very, very old, an intersection where the iconography of videogames crosses changing notions about how we experience music. For further information on the second of these two lines of thought, see this strangely impassioned essay or find that one dude you know who owns Zaireeka (1997). The point of both, and especially the point of Everyday Shooter, is an interrogation into our interactions with music. I mean, Girl Talk remains popular; someone has to ask why. Plenty of artists have questioned in this past century what determines “music”—James Brown and Terry Riley stopped worrying about changing chords, for example—but Mak bravely attempts to create a user-friendly interface to modulate the already created work, blurring the line between listener and creator, remix and art, iPod and videogame. That he’s released it in this populist medium, and upfront, through Sony, only makes its subversive kernel more effective.

To be specific about what this is: killing shit, and picking up points and chaining those shits that you killed, creating guitar tones over an unchanging guitar track so that the aggregation of these tones builds nuance and emotion over the course of the backing track’s runtime. Or, hey, YouTube.

Fuzzy, huh? Surviving a track’s runtime is beating the level, and the next track (level) starts. It’s pretty fun, although, to be fair to videogames, can be a slog. Gaming sites decry its point system, remembering fondly the generously magnetized geoms of Geometry Wars 2. That game, an effort of Hemingway-type purity in construction, performed some sly maneuvers to emulate the sense of musical interaction felt here, dramatically cutting the volume upon a death and dilating in sync with an onscreen bomb, but it risked nothing for this sake. The game’s chintzy electronic soundtrack functions as just that: a soundtrack, coyly attached to the player’s successes.

Mak, however, goes balls-out. Everything is his guitar; everything is him. He speaks frequently of the game’s personal backstory, about how after years of toiling on more ambitious projects he stood back and realized that he summarily hated them. This yielded a desire to pare his work down—a return to the simple everyday shooter, natch. In so doing he has created a work that’s one of a number recently that treats videogames as a serious medium of personal expression. But unlike, say, Braid, which revels in high-art phrasing but treats videogames like a fling with someone from the wrong side of town, Everyday Shooter remains triumphantly psychedelic and decidedly videogame-y. It’s delirious stuff, but feels like a success built upon failures, seething with Mak’s backstory. It feels desperate and insulated; there’s melancholy in these tones and brutality in these game mechanics. On early playthroughs my friends and I made up sardonic lyrics to his riffing, all, “Fuck you Mom / I’m not paying rent / You shouldn’t have gotten divorced / Fuck you Mom,” which was our typically pithy way of dealing with the surplus of desperate emotion on display here.

Which is to say, Mak’s music isn’t exactly attuned to my taste. One of my least favorite things a guitar can be used for is to play sequences of chords with predetermined strumming patterns; this is probably why I made such a lousy guitarist, and why I like Young Jeezy. Still, in Mak’s creation a certain cacophony emerges midway through each level, a violent senselessness ordering the arrangement of two-note trills, whammied plunges, and emphatic chiming smacks. You sense it accumulating, slightly, in that YouTube trailer above. These moments of sublimity can feel undermined by the backing track, which dips melodramatically into “breakdowns” and “crescendos” when I would rather hear something repetitive underneath, placing the emphasis on the violence onscreen and its correlating guitar bloodspurts. More to my musical liking was this year’s Keith Fullerton Whitman-esque Nintendo effort Orbient, a blunted outerspace puzzler that, with the player’s successes, transforms a melancholy three-note musical figure into a bright, scintillating aural sunburst.

The gracefulness of that release was both a benefactor and victim of Nintendo’s quality control; it was beautiful but industrialized, and, unlike Everyday Shooter, bore none of the messy fingerprints of its creator. So, what I said up above about how we only review music: a bit of a lie. I find myself in the strange position of rating Mak’s intentions. As an album, I wouldn’t have made it past the second track; as a videogame, it’s outclassed by a number of glossy throw-back shooters. But that it’s both is its triumph, and in this it lacks precedent. We ought to review it as much as GamePro. Certainly, there are other “music games,” but those of Harmonix’s ilk are a combination of karaoke, Tetris, and Nerf, and Wii Music finds Miyamoto’s pluralism so abundant it threatens to liquefy his artistry. My precious Orbient may show the two fused in big-budget spectacle, but the soulless austerity of that work stands in stark constrast to Everyday Shooter’s soul-bearing. Indeed, from bleeps and shapes and third-rate riff rock Mak conjures a place, an emotional narrative, a tableau of a desperate situation that may not be real but exists cognitively in the mind of the user. That is art—frustrating and embarrassing but (above all) new.