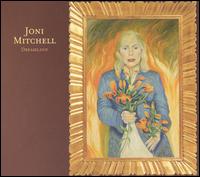 So, what do you do with re-issues and/or “best of” musical biographies? I, generally, acknowledge the greatness of whoever Rhino is bestowing its near-weekly honours upon, listen to the compilation once through, withstand the urge to flick through the less-than-grabbing “old sounding” songs, persevere through the valuable history lesson, and remember high points so I can use them as comparisons for modern music in upcoming reviews. You’ll probably see “Joni Mitchellesque in her insatiable wanderlust” appear in one of my too-flowery scribbled frolics (see?) before Christmas. I hope you realize that when I do eventually type that, it’s with crossed fingers and worries that “jeez, I sure hope this makes me sound like I know what I’m talking about.”

I listen to CBC Radio on weekends, I have once-cool parents---I know who Joni Mitchell is, sure. She wrote that song that Counting Crows killed themselves with. She also---just last week---received the prestigious (yes, in all sincerity) Order of Canada, and, just a week prior to that, an honourary Doctorate of Music from McGill University in Montreal, and, a much longer time ago (1981), was inducted to Canada’s Music Hall of Fame. Overall, she’s as iconoclastic as they come for Saskatchewanians and, as Dreamland attests, wrote some pretty timeless pop songs in her day, too.

Now I don’t throw around the word “timeless” like a Darren Hanlon burn; it’s an underrated honour I bestow upon songwriters who, although writing poignant songs firmly grounded “in their time,” somehow cast off the anchors of their own era with material that continually remains relevant through generations of listeners. Mitchell’s “Big Yellow Taxi” (the “paved paradise / put up a parking lot” song) is a perfect example. Mitchell bemoaned corporate and environmentalist woes long before the World Wildlife Federation sued Vince McMahon for exclusive rights to their greenie-logo. I’m therefore surprised that today’s student generation is so eager to uproot old Dylan and Baez to the exclusion or ignorance of Joni Mitchell. She was, undoubtedly, one of the first purveyors of grassroots anti-corporate politics---most notably manifested in the “Free Man in Paris” commentary on always-looming “big business” artist corruption. And that was 1974.

“Free Man in Paris” does indeed open this collection. I’m advised by the boss not to do this, but I’m going to reprint some of the lyrics, assuming that if you’ve read this far you probably want to know exactly what I’m talking about when I say “timeless”:

I don’t go in for poetry readings, and I don’t snap my fingers in applause at rock shows. But I do know that Percy Bysshe Shelley once said “the poet is the prophet” (Defence of Poetry), and “Free Man in Paris” is what he was getting at. I mean, c’mon: “Stoking the star-maker machinery / Behind the popular song;" does this sound familiar, Mr/Ms. Indie Rock Fan?

And aside from the brilliant writing, it’s equally remarkable that Mitchell’s barely-restrained vocals and lush, folky alt-pop-country arrangements (she was obviously a genre prophet too) also hold up well today. Sure there are cheesy moments of overlush keyboard washes typical of the '70s, but we’ll be hearing the same complaint about the over-use of the scratch in early '00s pop music in 30 years’ time---hindsight is 20/20. Mitchell wasn’t afraid to dabble, either, as shown by “Dreamland” from 1977’s Don Juan’s Reckless Daughter. This sounds like a tribal percussive precursor to Graceland without the tacky African-choir overpimping. “The Jungle Line” (from 1975’s classic The Hissing of Summer Lawns) starts off like it’s been remixed by TV on the Radio and contains the succinctly wise ironic one-liner: “through savage progress cuts the jungle line.” Mitchell could play with the prejudices of her era’s old boys’ club as well as any M’Shell Ndegocello today.

Where the compilation falters is its inclusion of Mitchell’s anti-timeless late-'80s/early-'90s work featuring raspy-voiced Richard Marx wannabe vocals and the absolute worst parts of the period’s stifling overproduction. If you followed Mitchell from the '70s forward into the '80s and early '90s, you’d probably praise the editor for comprehensiveness in the inclusions of “Dancin’ Clown,” “Nothing Can Be Done” and “Come in From the Cold.” But for this writer, approaching the body of work from the middle of the experimental folk/roots renaissance, this sort of glammed-up Mitchell is the antithesis of what I love about the barefooted “You Turn Me On I’m a Radio,” “Carey” or “California.”

Finally, the 2002 full-orchestra album closers “Amelia,” “For the Roses” and “Both Sides Now” are charming in their own right, sounding like Billie Holiday’s and/or Nina Simone’s thicker compositions, but are mismatched against the “pure” '70s Mitchell that features on the better part of the release.

While Dreamland is disjointed, it still remains an accurate career-spanner as well as a brief glimpse of eras-in-a-vacuum and how a brilliant songwriter navigates her way through them. The testament to Mitchell’s talent is that as she’s moved through musical periods her catalogue from the '70s has always been right behind her and, at some points, has actually carved the way for the acceptance of her more recent work. Don’t approach Dreamland as a Greatest Hits collection; approach it as a two-way street.