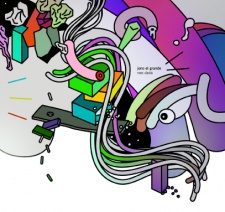 Do we need a new dada? The answer this album poses is a resounding “maybe.” The music of Jono El Grande falls somewhere in the overlap of a Venn Diagram that includes Magma and the kind of semi-orchestral Frank Zappa you find on his early 1970s albums (200 Motels, Waka Jawaka, The Grand Wazoo, and the material recorded in the mid-seventies that ended up on Sleep Dirt and Studio Tan). The short review for Neo Dada is therefore easy: if you don’t like either of those references, you won’t like this. This album is a host of “Strictly Genteel” and “The Adventures of Gregory Peccary” references, and most of the solos sound ripped directly from “The Ocean is the Ultimate Solution.”

This album features some great tracks and some less great tracks, but given the ambition here the best way I can think of to explain why is to talk a little about what happens when you rub Zappa and Magma together, because the two don’t make quite as harmonious a union as you might expect, and not just because you’re piling one kind of difficult onto another. The Zappa-isms give a very distinct levity to the zeuhl aspects of Neo Dada, but the problem is that zeuhl itself isn’t unfunny. What makes it seem superficially grandiose and overbearing is that fact that zeuhl as an idea about music—and I’m not talking about how it sounds, since fans of Ruins and Magma and Dün and etc. will tell you how unalike these bands sound—is set-up as a foreign language (both literally, in terms of the created languages it often employs, and musically) that you have to decipher to get the humor. Or anger. Or pain. Or whatever. Zeuhl as an aesthetic form is like any approach to culture that asks you to step inside it and learn it from the inside out.

Now, there are people who don’t care to do that, and there are a lot of absolutely perfect reasons why you might not want to, starting with: why bother creating a new world when we barely have a grip on our own? Science fiction fans might have an answer for you, but, again: it just depends on what is your cup of tea, above and beyond whether you actually like zeuhl music—and here I do mean the way it sounds. But here’s why Zappa is entirely different: for all of his innovative approach to composition, Zappa was never really interested in depth. Or emotion. Aside from maybe “Watermelon in Easter Hay” and theoretically maybe “Sofa” I’m not sure there are many instances where even the pretty parts of his discography aren’t inordinately satisfied with how they explicitly mock what they themselves are—and even the two examples I listed above are meant to be bogus pomp as much as they are melancholic. In other words, Zappa’s music is all surface, all the time, and in that sense Zappa’s music is a very specific kind of pop music whereas Magma’s music, say, is very specifically not. There’s nothing to learn with Zappa; whether you like his music or not entirely depends on whether you think an insanely complex Ruth Underwood percussion solo wedged in the fleeting space between two rock riffs is just as funny a joke as Father Oblivion making pancakes with sperm. Or whether either of those things is a substantial commentary on rock music. It’s all punchlines, is the point, and you’re left to hope that it sounds interesting while doing that, and not in the “did you hear that shit that Terry Bozzio just played?” way. Unless you’re that kind of music fan. If you are, then check out Crack the Skye, or that new Korn album.

It’s hard to tell whether Jono El Grande is explicitly trying to merge these two ideas: the Zappa stuff is incredibly apparent—and at times, derivative—whereas the zeuhl stuff may well simply be a byproduct of his attempts to make the Zappa stuff not derivative. Either way, he does his best fusion on the title track, which rides a King Crimson slowcore riff in between Underwood-style percussion fills and Magma-style lyrics. It’s a brilliant little track that gets to have it several ways, and the lovely synth squiggles over the off-time mid-section are a gorgeous update to the section of the song where Zappa would normally have inserted a big-time slowed-down guitar solo. But check the other side: “Ballad Morbido in a Dozen Tiny Movements” and “Big Ben Over” just sound way too much like somebody trying to sound exactly like Zappa, and while neither is accompanied with the groans you might expect to be elicited from a musician in 2009 trying to sound exactly like Zappa in 1974 the extent to which you like these two tracks will depend entirely on the extent to which you like a track like “Big Swifty.”

Okay, but it’s more complicated than that, because why “Big Swifty”? This rock/jazz/orchestral stuff worked for Zappa when he was playing it with his small mid-seventies jazz rock group that featured stellar musicians like Underwood. But once he moved away from band-based recordings into session musician-laden studio-sheen stuff like what was supposed to be released on Läther his material went off the rails a bit. Jono El Grande thankfully avoids the overuse of directionless fretless bass tone that permeated Zappa’s late seventies work or the even stupider “reggae” stuff he did in the 1980s, but his work on Neo Dada inadvertently highlights the uneven nature of Zappa’s discography, especially when removed from the context of…Zappa’s discography. I.e. “Inca Roads” (or even better, the live “Inca Roads” from You Can’t Do That On Stage Anymore 2) was and will always be better sounding and a better song than “Big Swifty,” or “The Adventures of Gregory Peccary.”

Now, I know I’m going on a lot about Zappa in a review not about Zappa but hang with me: it’s really amazing to me just how similar parts of this album sound to the types of compositions Zappa was pursuing early in his solo career—just check that guitar riff in “Olso Cody Suite” that starts up around 1:45; I wracked my head trying to figure out what track it was ripping off and then realized the answer was “most of them.” But with nothing as technically complex as “RDNZL” or “Approximate” or immediately gripping and finite as “Florentine Pogen” or “Andy” or rocking as “Zombie Woof” or “Shove it Right In” or even as pretty as “Peaches on Regalia” at least half of this album is taken up with the kind of bland, emotionless, snarky music that most Zappa fans, I think, will acknowledge that, amidst the sheer mess of work Zappa released in the 1970s, is secondary; it resembles the non-“RDNZL” tracks off of lesser albums like Studio Tan and Sleep Dirt which are not so much notable for themselves as they are for the way they complement, explain, and elaborate the better songs on better albums like One Size Fits All. Jono El Grande seems inordinately interested in the building blocks of Zappa’s mid-seventies style, but hasn’t really built much with them yet, I mean. And the fact that he hasn’t is reinforced by how much this material sounds like Zappa’s mid-seventies style. Etc.

So let’s talk about the other half of the album, because that’s what’s actually exciting. The rest of the songs on Neo Dada sound and don’t sound like Zappa; the deja vu normally accompanies a specific chord phrasing or riff moreso than the entirety of a song. “Your Mother Eats Like a Platipus,” for example, rides a string quartet brilliantly, a beautiful little string composition that is difficult without being obtuse. “Choco King” features Zappa-style mallet lines but everything else is a zeuhl bonanza; the violin treatments are fascinating, and the kazoo raunching in the background counteracts the plodding foreground. “Three Variations on a Mainstream Neurosis” also owes a lot to Magma, though the sax solo towards the end is all Zappa. But the contrast between the two is fascinating, as this thin reed warbles above an expansive and gloomy guitar grind. This type of material is much more original; it owes to the past, but it sounds very much like a new kind of these musics.

Neo Dada isn’t really hit or miss; it’s more hit or “meh.” The too-Zappa tracks are still interesting compositions; I just wish that he hadn’t worked so hard to get the production and arrangements to sound exactly like his source material. Those tracks are a bit too slick, and they add nothing new to musical vocabulary. I mean, it’s one thing to learn how to do somebody else’s thing really well, I guess; it’s quite another to be inspired by somebody else’s thing to do your own. Neo Dada (mostly) isn’t new. And the conclusion you might draw from the fact that it’s made me think so much about Zappa albums I haven’t listened to in over a decade is maybe the only subtext it has. Which is a shame, since what’s good here is really fun.