1. The Rabid Wolverine Attacks
2. Chris Benoit’s Kid Had To Die
3. WrestleMania of Love
4. Hell Of A Town
5. The Dogs Are At The Gate
6. German Suplex
7. That Certain Something
8. You Sound Like You’re Sick
9. Wolverine Party In Heaven
10. The Ballad Of Eddie Guerrero 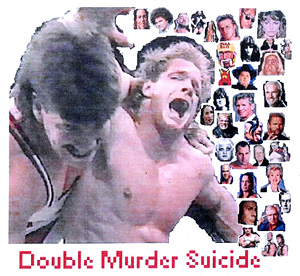 So I’m walking to school, freezing, trying to convince my blood to keep circulating, trying to convince myself that my post-secondary education is worth it, trying to talk reality into a pool of sunlight. This failing, I try talking to myself. “You can do it,” I’m whispering through cracked lips, and the words billow out from the top of my scarf and freeze across my face and glasses in cold-burning crystalline fractals. I stagger, and snow falls into my shoes but doesn’t melt because my feet aren’t warm enough. I suffer extravagantly. “You can do it,”—the thought crawls sluggishly through the contracting neural channels, and the wind rebuts by slapping me quick across the face. From my headphones (which are clamped over my toque but under my hood) comes the voice of Joshua Goldberg: “Edmonton, yeah, Edmonton, yeah, hell of a town.” Half a block ahead of me, I see the Education building, and I break into a desperate shambling run, possibly twisting my ankle, but it’s too cold to tell. It’s pathetic. The warm air inside brings no relief. Actually, it hurts like a motherfucker. The nerves that had already surrendered to death wake up screaming. I go into a bathroom to de-fog my glasses and run my hands under cold water that feels hot. Entering a stall, I see the toilet is steaming, heat radiating from the bowl. The toilet water is near boiling.

This is Edmonton, my hometown and Chris Benoit’s. No wonder he ended up a murderer.

But I’m being simplistic. Of course, there must have been more to the professional wrestler’s sudden homicidal mania than the fact that Edmonton sucks, which is why Goldberg wrote an entire album about the day Benoit came home and killed his wife, his child, and himself. Why stick exclusively to the “ascent from shithole-city basement-wrestler wannabe to WWF celebroid” angle when there are so many others to pick at: wrestling’s glorification of violence, the drug use, the television-induced cravings for melodrama, and, of course, those repeated blows to the head. And instead of getting caught up in the reason for the tragedy, instead of wrinkling brows and pointing fingers and feeling troubled, Double Murder Suicide blithely tries to count the number of heads this particular hydra has got, and when it finds itself confounded by those ever-moving faces, falls laughing dizzily to the floor.

Yes, this is a funny album. Even if you can normally manage to listen to wrestling commentators with a straight face, you’ll probably crack at least a wry smile hearing their melodramatic man-bellows juxtaposed alongside a narrative of non-choreographed violence. The placement of professional wrestling’s faux drama and violence beside a narrative of true tragedy and brutality is what gives Double Murder Suicide its impetus. The album’s meaning, if it has one, is to be found in the ricochet between mirth and reproach. When Goldberg sings, “He takes his kid by the neck / And suffocates him with a crossface chickenwing,” you laugh, then guiltily admonish yourself for laughing, and then justify it with a “Hey, at least I haven’t killed anyone.” It’s a sick world we live in, but that doesn’t mean we can’t have some fun.

Or fall in love, for that matter. The album’s sole ballad “Wrestlemania of Love”, for all its irony, taps into the tender idealism we all feel at some point, entering into a relationship or a new career, before we end up turning into people we could never have imagined, and committing crimes that would have once seemed impossible. Meanwhile, “The Ballad of Eddie Guerrero”—the album’s catchiest and possibly most genuinely affecting track—is just a buddy song, an ode to a fallen friend, and a remembrance of parties past. These slices of normalcy seem to wag a finger at the morbid obsession we have with only the darkest chapters of existence, chastising us for forgetting that a life is marked by more than just its final brutal day.

Such an ambitious album running the gamut of emotions definitely requires a delicate studio touch, careful production, sweeping orchestrations, instruments that sing. We’re dealing with tragedy here. It’s not the kind of thing someone can just throw together in their living room, right?

Oof. This is going to be the most lo-fi record you listen to this year, besides your twelve-year-old brother’s first band’s demo recorded on a Fischer-Price tape player. It’s so unpolished that a lot of listeners will decide to go elsewhere for insights on homicidal mania—reruns of Murder She Wrote, or Sufjan Stevens’ sparkling “John Wayne Gacy, Jr.”—and they can’t be blamed. Most of us need some Angela Lansbury or some warm piano chords to help us down the harsh realities of life. A spoonful of sugar, the saying goes. Double Murder Suicide doesn’t go in for that. In fact, if you don’t come away from this album confused and creeped out, you aren’t listening hard enough. Is it sincere? Ironic? Is it a glorification or a condemnation of wrestling and of Chris Benoit? Is Goldberg saying there’s really no one to blame? That this shit just happens? By the end, the harshly degraded guitar tones are the least of your problems. The answer to all your uncertainties about the album’s production lie in the word “Deerhoofian.”

And the fact that the production is unpolished doesn’t mean it’s bad. There are some great pop ideas nestled in the fuzz. The keyboard outro to “Chris Benoit’s Kid Had To Die” is a whimsical non-sequitur. The drums (which are not so much real drums) have a clicky ’80s appeal. The album appropriates various clips and lyrics and incorporates them seamlessly into itself, with the many clips of wrestling commentary and of Benoit’s awkward monologues themselves alternately serving to chill and amuse. Then there’s the casual use of lyrics by P!nk. I’m still trying to figure that one out. The cover of the Ramones’ “You Sound Like You’re Sick” sounds so perfectly at home on “Double Murder Suicide” that it might as well have been written specifically about Benoit.

But this album is not so much about production or mic placement or sweet guitar tones or sequencing anyway. It’s about poking a corpse with a stick. It’s kind of a gross compulsion, but as every kid who’s jabbed at a dead bird with a branch knows, sometimes something interesting crawls out.