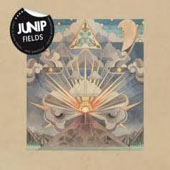 Junip is to Jose Gonzalez what the Whitest Boy Alive is to Erlend Øye: a near-funky way for a sleepy, and in Gonzalez’s case, rather stern singer-songwriter to break loose. That doesn’t mean either of them break too far above a whisper, at really any time; it certainly wouldn’t hurt if Junip’s debut Fields had some bass guitar or if Tobias Winterkorn’s slowly swaggering, dirty Moog was amped up a bit.

But for the most part, Fields is a necessary revitalization of Gonzalez’s increasingly inhospitable aesthetic. Once upon a time, his distanced analysis of messy relationships made him an arresting, commercial-ready figure. But then In Our Nature (2007) took Veneer‘s (2003) Nick Drake-style solo guitar and unconventional tunings down an airless rabbit hole, populated mostly by moral fingerwagging obtained secondhand from Richard Dawkins and Peter Singer. It represented a kind of religious/anti-religious omega point, with atheist fervor becoming as simplistic and fundamentalist as any praise and worship propaganda.

Here, his lyrics retreat to the vague relationship-based imagery of his early work—the songs that padded out the cover of “Heartbeats”—where his rigorous delivery meshed so unforgettably with the Knife’s breathless, infatuated lyrics. “Nothing is compromised / Nothing is lost,” Gonzalez sings on “Don’t Let It Pass,” and the way that feels like a touching, vulnerable fantasy for the atheist biochemistry PhD candidate inside him makes it much more effective than the “you’re all deluded” hectoring he has stooped to in the past.

That song could pass for a full band cut from his solo albums, but the rest of Fields tends towards a kind of simple Krautrock centered around Gonzalez’s sound—the hushed coos, the intimate, acoustic melodies—streamlined so that intensity relies more on music than lyrics. It’s striking to hear Gonzalez keep hitting the same note on “Sweet & Bitter,” to follow the interplay of jazzy keyboard, motorik drums, and simplified classical guitar on “Rope & Summit.”

It’s this, that instantly recognizable, natural interplay between Elias Araya’s drums, Winterkorn’s keyboards, and Gonzalez’s guitar and vocals, that gives Junip a raison d’etre far beyond a vanity side project. Songs like “Without You” or “It’s Alright” lack the pop momentum of a Jose Gonzalez solo track, or the building acoustic churn of the best songs here, but they’re still instantly recognizable as a collaboration: Winterkorn improvising above and around the melody, Araya keeping it simple and tense, and everybody’s favorite Swedish Argentine doing that thing he does through the middle.

The way that Araya, Winterkorn, and Gonzalez underplay their dynamic on “Howl” is perhaps the most significant sign that Junip’s abilities are still forming, that any perceived empty spaces can be filled by dexterity rather than more bodies. Gonzalez whispers quieter than usual, Araya shuffling beneath. But the periodic, unexpected cowbell, combined with Winterkorn splitting synth duties between bass squelches and starry interludes, gives the song an off-kilter, casual mystery. Gonzalez’s lyrics are murmured, and though they are as militantly hyper-logical as anything on In Our Nature, their eventual open-endedness provides a pleasing note of inconclusiveness. “Now we could talk about moral responsibility” begins a laundry list of human attributes: happiness, suffering, “exuberance of the soul.” “But it would help / To figure out,” he ends, and that allowance for dialogue, though slight, is the landing point that any Gonzalez song needs—the “Heartbeats” microcosm, the human shade that’s necessary to give perspective to sterile, all-knowing reason.

Junip, and Fields in particular, is a fresh infusion of “exuberance of the soul” for an artist whose lack of exuberance is both an artistic necessity and a claustrophobic limitation. They may not yet have a strong enough aesthetic to make a great album, but they’ve made a unique, highly promising one that might soon create something which can bring Gonzalez’s academics into the realm of something softer. In the way his best songs and covers were, and still could be.