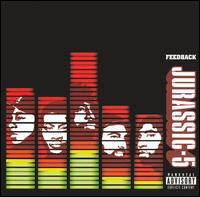 I love this shit; bad art has its purpose. The great, great thing about Feedback is that now no one can make ignorant, offensive statements and suggestions like “I do enjoy this one hip-hop group called Jurassic 5,” or “Jurassic 5 are what real rap’s about,” or “Let’s listen to that new Jurassic 5.” Feedback is my favorite Jurassic 5 album because it is their worst, because it is so obviously crappy that, should anyone have the audacity to try to argue the group’s merits post-EP, I can simply hold up this album, cackle, jump in my whip and ride off into a sunset full of victory and rightness.

Any claim that Jurassic 5 stand for the roots of hip-hop, for its essence and heart, that they neglect innovation and hardness for the sake of reminding us all of hip-hop’s culture – that convenient bullshit gets wonderfully undermined by Dave Matthews singing the hook of “Work It Out,” a culturally dispersive move that even Kanye wouldn’t touch. At least when Kanye’s blending, the drink turns up distinct and hooky, and sometimes does feel culturally incorporative, which is the essence of hip-hop. “Work It Out” has no groove, no cache or kismet, no real novelty, no purpose other than the names of its collaboration and to fill the album’s center with marshmallow. The rest of the album slides off the edges of its horrendous gloop.

Bloated on the rotting corpses of hackneyed scratching, hackneyed drums, hackneyed sampling technique and hackneyed key work (all that in hackneyed combinations), Feedback makes it difficult to differentiate the acceptable from the tired. Other rap albums put all their moneymakers in prominence, but when this album tries, we get “Radio,” Salaam Remi aiming for the minimal synth trend and instead spooging out the most laughable attempt at a radio single I’ve heard since, well, “SexyBack.” By the time musically decent shit rolls up in the second half (“Future Sound” and “End up like This”), I guarantee, no one cares, including Jurassic 5.

Visionless production isn’t what makes Feedback nigh impossible to enjoy, or it is the reason only insomuch as it affects the mic. Jurassic has four rappers who aren’t all that good at rapping, and, at this point in their careers, even less good at saying things worth hearing; you have to sit through each one of these guys on most every song, which makes most every song feel long and taxing. I suffer them talking about how they are going to rock on my radio, their sex begging, bear the “in the house” of “In the House,” and I’m rewarded with “End up like This,” but still get a grimace when Chali 2na mentions touring with Santana. Feedback soils its own paltry joys.

I hate to be such a snob, but it needs to be said, and we all need to be clear: to the golf team mook whose iTunes consists mostly of Third Eye Blind, TV compilation classic rock and a hip-hop nook of Tupac, Bone Thugs and “What’s Golden,” I dare you to like Feedback. I fucking dare you. Dude, the deepest cut will be that, by the time you get done with “Work It Out,” you’re not even going to like DMB any more.

And that’s why I love this piece of shit album.