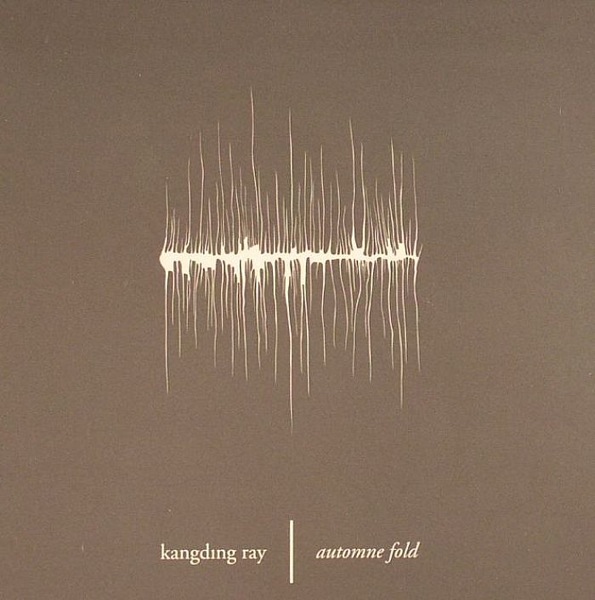 I can’t explain how we slept on this one, except that maybe its beauty is so unobtrusive I’d mistaken the semi-epiphanies it provoked for something outside of my headphones. Like Burial’s Untrue (2007), Automne Fold‘s urban, nocturnal loneliness can sound morose or blasé intially, until you wake up one day and realize the music has become like a second skin. Kangding Ray might also end up doing for minimal/glitch techno what Burial did for dubstep: establishing warmth and intimacy in a genre not known for either.

The album might come across as a complete departure for Raster-Noton—a label whose releases aren’t all as austere and clinical as Ryoji Ikeda’s Test Pattern, but who nevertheless have established themselves on the fringes of minimal techno. Still, when you take away the layers of warm distortion and (gasp!) vocals, all the elements that mark the label—micro bits of static, CD skips, and other digital bi-products—are still there. More song-oriented tracks like “Idle” and “World Within Words” might sound more suited to the more ambient-leaning side of Kompakt, but there’s still something insular about them. The latter manages to build intensity by the even-metred bass which anchors the whispered speak-sing of the vocals, but the Oval-esque processed guitar backing turns the track into an investigation of space rather than the pop-linguistic philosophy that the lyrics seem to suggest.

These attempts at profundity do outweigh the music on “Apnée Part II,” but it’s all the rest of the tracks that use vocals as simply another sound in the mix that really stand out. On “The Distance” they’re cut-up, flipped around, and subjected to glitchy intrusions, but they still sound remarkably organic. Like everything here, the deep bass hums that rattle your body don’t get in the way of the details but merely provide smooth walls for the edgier sounds to brush up against. The title of this track is ironic; this music is right inside you.