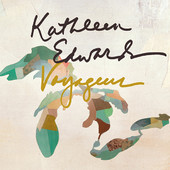 A lot has changed in Kathleen Edwards’ life since her last record, 2008’s Asking for Flowers: she ended a four-year marriage to musician Colin Cripps, took up with Bon Iver’s Justin Vernon, and moved her songwriting even further from the alt-country terrain she first tread and into a much more mature, mainstream pop sound. While the former two life-altering events offer a lot of material for a record, the latter only seems to flatten what should be a breakthrough moment in Edwards’ career. As a post-divorce record, Voyageur is mostly a sad, exhausted-sounding affair, which could be disappointing for fans of Edwards’ sharp wit and sly everything else. Edwards’ voice remains beautiful and her words honest and engaging, but on this her fourth full-length, she often lacks the spark that made her best work so memorable.

With each album, as she ironically moves away from alt-country, Edwards seems to be further dedicated to telling more personal stories with greater sincerity. This evolution, while not necessarily a bad thing, is unnerving in light of her sensationally witty, aggressively full-of-shit debut, Failer (2003), which succeeded almost oppositely. To me, Edwards’ greatest charm lies in her faux-gritty bravado and cutting sense of humor. Which she mostly shies away from here. Voyageur is soft around the edges and more plain-spoken (not to mention that it was produced by Justin Vernon, whose penchant for sincerity is well-documented in his own discography); there are no stories about good-hearted outlaws and sleazy roadside trysts, just those about distant husbands and wives that wish they were free.

That said, Edwards remains an accomplished songwriter with a voice that can carry anything; it’s a pure thing, with a hint of roughness, that voice. Vernon’s presence doesn’t really announce itself but for the occasional swelling arrangement; Edwards does all the heavy lifting here. Voyageur starts strong with “Empty Threat” and “Chameleon/Comedian,” which contain some of the record’s best hooks. In fact, “Empty Threat” is one of the more upbeat tunes on display, a song about pretending to move on but still playing games. “I’m moving to America,” Edwards (who is Canadian) sings, adding, “Moving to America is an empty threat.” “Comedian/Chameleon” is probably the closest thing we get to a story about one of Edwards’ favorite topics: slimeballs who may or may not be in the entertainment business. It’s sufficiently haunting, all minor keys and Edwards grimly repeating, “I don’t need a punchline.” Another highlight is the album’s first single “Change the Sheets,” which suffers from some super-shiny production but provides the most rousing chorus on the record, thanks to a strong Neil Young influence.

Most of Voyageur, however, is wispier than it should be, about half-comprised of slow, lonely ruminations much too vague to pin down to any feelings besides slowness and loneliness. “House Full of Empty Rooms” manages to break through by way of its spot-on characterization of the end of a relationship: “You don’t kiss me / The way that I wish you would / Maybe I don’t look at you / In a way that makes you think you should.” But those kinds of apt moments are not common enough, and some evaporate from memory before the record is through. On “Mint” Edwards seems to finally have a little fun, riding some subtle ’60s vibes through a story of temptation and desire. “Pink Champagne” is probably the best of the record’s somber closing tracks; it’s surely the most harrowing, as Edwards, in her sighing, gorgeous voice, manages to capture the guilt that comes with the discovery that what you want is the opposite of what you’ve committed yourself to.

Though at times deeply affecting, Voyageur is not the great statement of a record one might hope for after a four-year absence. It’s clear that Edwards is looking to explore, to stretch her sound and style. Honesty and sincerity are all well and good, but as she evolves perhaps she’ll find a way to unite that old Kathleen, she of the dirty mouth and the made-up stories, with this new, world-weary, and heartbroken one. Ball’s in your court now, Bon Iver, Bon Iver.