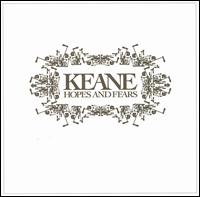 Since Coldplay brought some much needed life back into commerical rock about four years ago now, several British bands have emerged trying to replicate the moodiness and sentimentality that made Parachutes and A Rush of Blood to the Head such terrific albums. The newest band to do so is the twenty-something trio of Tom Chaplin, Tim Rice and Richard Hughes, who call themselves Keane. The band formed in 1997 and have released a bevy of singles, but Hopes and Fears becomes their debut album full of emotive and majestic tunes.

The first track, “Somewhere Only We Know,” introduces the band’s signature use of piano, drums and infectious pop music. Although they’ve been incessantly compared to Coldplay, the only thing the band has in common with them is their affinity for the piano. Chaplin sings in his Fran Healy inspired voice: “Oh simple things, where have you gone?/ I’m getting old and I need something to rely on.” The song is heartfelt and nothing short of beautiful. The next track is “This is the Last Time,” which has a poppy melody and almost borders on an easy listening song, but the instrumental bridge really lets the song shine with its omnipresent piano. On this track and others, the band channels Travis, Starsailor, Aqualung and, ever so slightly, the '80s wundergroup, Wham!

“We Might As Well Be Strangers” becomes a highlight on the album with its slow and melancholic feel, its lyrics about the tried-and-true theme of not being in love anymore: “I don’t know your face anymore/ We might as well be strangers in another town.” The song is effective with its sense of loss and thoughtful precision. Next is “Everybody’s Changing,” which was first released as a single long before the album had materialized. Keane uses keyboards to create a poetic song about coming of age in an uncertain world.

“She Has No Time” is another measured and solemn song where Tom proves his strong vocal skills with his ranging falsetto. Warm keyboards replace the piano as the stripped down song shows off the band’s raw emotions and poignancy. “Can’t Stop Now” returns Hopes and Fears to more upbeat fare, as Chaplin continues in the same lyrical avenues: “I can’t stop now/ I have troubles of my own.” “Untitled” is the anomaly song on the album due to it’s moody keyboard centric, echoing space-rock sound that seems misplaced and unnecessary. Meanwhile, the album's final track, "Bedshaped," ends the group's debut on a middling note, never quite matching up to the highlights that preceed it.

Hopes and Fears is one of the better British pop releases this year, but by no means does is compare to the lush and bigger sound of counterparts like Coldplay. The songwriting is surprisingly good for a group of youngsters who seem to have a grasp on life, love, pain and change, and the total lack of guitars makes for an interesting, if not a little gimmicky, sound. Just when one thinks the album is going to cross the line and become overtly sappy or sentimental, it somehow doesn’t as the songs turn into something more substantial. Keane may not make a huge ripple in the ever-changing music industry, but they are worthy enough to at least make a drop in the pond.