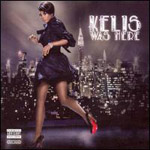 Kelis can’t sing? YouTube the live version of “Get Along With You” then get back to me. She doesn’t pipe so much as dive and dip and crawl. On album she can sing (the incredible “Suspended” from Kaleidoscope) but often doesn’t. She clips everything to half-sustain and needles her vocal thread through the holes left in the musical patchwork with a sultry detachment that could be compared to Nico if it weren’t that it’s from such a different origin and, well, doesn’t sound anything like Nico. Embracing cool rather than histrionics, Kelis is not a pop or R&B but hip-hop diva. When she does emote (“I hate you so much right now!”), it’s in ways intense and unstable and a-melodic. Like a rapper, not Aguilera.

Conspicuously absent and no longer executive producing (Pharrell too busy with his quest towards absolute wackness), the Neptunes were always a huge part of the Kelis equation. To her vocal presence they were the equally distinct backing, but more importantly their approach to beatmaking and Kelis’ performance existed on the same plane of tension-via-stasis. Song structures were rigid and up-front, volume and layers sometimes lessened but rarely increased, Kelis refusing to indulge in runs or belts. Kelis bluntly replicated verses, bridges, choruses, and even shouts while the Neptunes let cement synthetic bedrock, yet a tightness of phrasing and the stacking of those hard blocks satisfied the overarching need of dynamic music. Repetition builds pyramids. The non-catharsis of the yelled yo’s which finished “Caught Out There” was perfect because there was simply nowhere else to go, space constricted to one last slab of rock on top.

Self-marooning characterizes Kelis’ best work; her entirely Neptunes-produced debut Kaleidoscope (1999) was shot through with its own alienation and is, as a result, a great album. Some more of the excellent same with Wanderland (2001), then Kelis and the ‘Tunes started splitting ways on 2003’s Tasty -- though not before their collaboration gave the world “Milkshake,” a single about as infamous as they come, but also a premier example of their synergy and the edgy territory they were capable of pioneering. While Kelis has done some great things with other producers (namely “Millionaire” with Andre 3000), it’s the precipitous urban zeitgeist she forged with Williams and Hugo that defined what great Kelis music sounds like. Today, Kelis hasn’t much changed her method, but her godfathers have left her (and, in these post-“Number One” times, Hell Hath No Fury is the only heaven that’ll redeem wanton Pharrell and complicit Chad). Fredo’s dead, too. Guess where that puts us.

Whereas a producer like Raphael Saadiq tends to bring out Kelis’ most boring and conventional jazz singer tendencies, horrifyingly ubiquitous Will.I.Am makes the mistake of thinking that he, BEP visionary (i.e. responsible for hip-hop’s cruelest joke since Kris Kross), can play to Kelis’ strengths, thus creating tracks so reductively Kelis they’re practically parodic. I dread what that fucker’s doing on the new Nas. “What’s That Right There” has Kelis and Will delineating that, yes, Kelis is sexy, over plodding, moronic programming straight out of the “My Humps” less-is-nothing musical black hole, lyrics from the same nothing-is-euphemism zerospeak that Will and the Pussycat Dolls retched at each other on “Beep.” For almost five minutes the two try their hand at jump-starting the album’s second half with “Weekend,” the typical second-half Kelis song, which involves being looser and more exploratory and, in this case, sucking more shit. I’ll be honest: anything that Wyclef doppelganger touches turns me into a bucket of blind vitriol, spilt on the heads of whosoever walks through his multi-colored, bead-crusted door. It’s not fair or balanced, but somehow I know it’s the right thing to do.

“Bossy” is the only complete success; it’s the first actual song, and it gets to have over an hour of sometimes formless, always schizophrenic shit slopped on top of it. The single’s hot because Shondrae’s beat, while sounding nothing like the Neptunes, works on the same principles. And, yes, also because Klasfeld tapped the same style and sense of place that he used to such great effect on the video for Clipse’s “The Funeral.” The only major flaw is the inane verse from Too $hort, a problem echoed by Nas on second single “Blindfold Me,” the mildly superior husband-and-wife PDA sequel to Tasty’s “In Public.” Polow Da Don’s cro-M.I.A. beat innervates Kelis in a way that few of the album’s other producers seem to understand. Although she’s fairly noxious on the verses, the bridge and hook remind of her weird charisma; then Nas comes in with a stale flow scheme and a final punchline of “Gonna surprise you like Hugh Grant in 8 ½ Weeks,” clearly the worst movie reference simile of all time, especially since one can’t tell if Nas means Hugh Grant romantic comedy Nine Months or Hugh Grant romantic comedy Two Weeks Notice or, God forbid, a Hugh Grant cameo on Hip Hop Is Dead. Smoke appears on “Ah Shit” as the only guest who doesn’t utterly embarrass himself.

Okay, Cee-Lo acquits himself well. He produces and croons on “Lil’ Star,” which samples “Suicide is Painless” and, predictably, is soulful and pleasant and inoffensive. Knobody’s tweaking of the Queen of Night’s aria from The Magic Flute tempts me to typify “Like You” as goofier Kanye, except the beat’s as modest as it is immediate. Kelis, also, is at her most melodically fetching; her laconic da’s straggle behind the dizzy coloratura like a lazy sing-along ball, and this demeanor fits the song’s shrug of an admission, “I don’t just like you / I ‘like you’ like you.” It’s junior high all over again, managing to sound simultaneously playful and game-weary.

That’s about it for highlights. More troubling than the stone-cold truth that the faux-punk put-down of “I Don’t Think So” is some of the worst shit you’ll hear this year is the fact that it makes no sense coming after “Lil’Star”; that “Blindfold Me” has no business preceding let’s-stay-together syrup like “Goodbyes”; that “Like You” and “Weekend” sound awkward next to each other if only because one’s good and the other’s abominable; that, without the vision of the Neptunes making everything cohere, Kelis has taken a flying fuck of a leap past the line that separates eclecticism from nasty-ass smorgasboard. Her multitudinous influences, free from the collagen that an omnipresent production team offered, have dissolved and separated out of their former matrix, the subsequent runny blotches of genre-hashing burbling up to fill Kelis Was Here with rubbish that has no discernible order. Whatever the industry criticism of “Circus” (Furtado did this song way better with “Showtime”) or the extended metaphor of “Till the Wheels Fall Off,” the album’s too addled to say anything beyond the tag of its title. Even that foregone conclusion’s graffed unclearly, Kelis’ latest confirming what Tasty hinted at: a hip-hop diva, like any other diva, needs a lucid musical framework in order to shine.