1. A Feeling of the All-Thing
2. Zeno of Elea
3. Entropy Reigns (in the Celestial City)
4. Chrysanthemum
5. Roseband
6. Satellites
7. A Dream in Three Parts (on Themes by Enesco)
8. We Live in an Expanding Universe
9. Sea of Sine Waves
10. Thurston and Grisha
11. In Paradisum 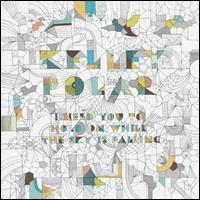 I Need You to Hold On While the Sky is Falling

Hold onto your 1980s blossom builds, your string crescendos, your tattered copies of Scritti Politti albums, your canned synths creeping across momentary “what?“s before dissolving into strange complexities and giant dance dips. It’s a sentence that might only make sense after hearing this album, but if you like Cupid and Psyche 85 or Nathan Fake or Barbara Morgenstern here’s another one that sounds like it was demoed on Tinker Toys and Fisher Price software. At least that’s what the albums share in terms of tone, though they don’t necessarily sound much alike in terms of content.

Here it’s kind of a fake out. Let’s get this straight: Polar is like the worst kind of overly-earnest music theater student-type personality. He’s not only good at what he does, he gets you buying into the cheese as if it all makes sense. Maybe it’s the pairing of classical and drug references, maybe it’s the quality routs of beats and Juliard strings; I’m not really sure, but I’m too busy shimming to dwell too much on whether my respect is grudging or not, even as my faculties correctly tell me that if I, who has long despaired over the cheesiness of dance music, finds this album cheesy? We get it: everything is connected; if we dance everything that is connected will be awesome; you and me and we are beautif—hey! Is that harmony really happening? Is he really singing “Satellites” with the best George Michael impression ever? Is that a Tony Banks-ish key board solo on “A Dream in Three Parts (on Themes by Enesco)”? Is this really a dance take on Enesco?

If you can get past Wham-as-musical-as-funk conundrums there’s tons to get wrapped up in. It’s certainly true that Polar does get a bit too wrapped up in his conceits at times (the Enesco stuff is pretty but also pretty melodramatic) but when he’s not struggling to create meaningful songs he comes up with gold. “Sea of Sine Waves” is good proof, a wild splash of vocodered background vocals, thick bass, and spunky melodies. “Thurston and Grisha” cements the vague Arthur Russell-isms that underpin the rest of the album. “A Feeling of the All-Thing” is the greatest hurdle here, mostly because a lot of the album’s real cheese is lodged in the first minute or so but…keep with it, because when this track finally explodes it’s gorgeous.

In the middle the album spirals in and out of thick, chunky ’80s pop and more internal tracks that draw down inside themselves. “Zeno of Elea,” the name of which sounds more like a random reference than anything else, shows Polar’s gorgeous sense for vocal harmonies and pop music. Similarly, “Entropy Reigns (in the Celestial City)” pairs Booka Shade/Dial-style synths with seriously ’80s motion to provide the foundation for a gorgeous duet between Polar and Claire de Lune. It’s a fabulous track, and by the time it tumbles into that instrumental outro it sounds like an entirely different animal.

Polar isn’t exactly Ewan Pearson producing Rufus Wainwright, perhaps, but that’s the sort of sincerity we’re talking about; this album entirely relies on your ability to accept Polar’s romanticism. By which I mean, everything on the album bar a couple of slower tracks (“We Live in an Expanding Universe”; parts of the Enesco stuff) is performed and projected beautifully. The issue is whether or not you can deal with New Age-isms and constant string barrages that toe the line between pop and melodrama.