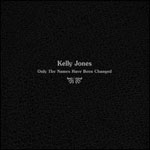 Only the Names Have Been Changed

So Kelly Jones put out a piece o' shit record; it's ok, I get it.

Write a review, I won't read it. Why would I want to? I don't need to, reviewer. I know this Kelly Jones, this filch from the Stereophonics. I'm familiar with that drivel -- the prattish Britpop of Word Gets Round (1997) and every half-assed MOR streamline since.

I know that the 'Phonics last studio record, Language. Sex. Violence. Other? (2005) was a right rinse: a transparent attempt to hew the easy-rock Counting Crows caw of the risible You Have To Go There To Come Back (2003) into the transient trends of the erstwhile nu-wavers. I know the "concept" was meant to wind. And I know this dickish little solo record of Jones' is just as fatuous in execution.

So what I'm saying is that whatever cluttered concept you've been cooking up, just lose it. This is splooge, and no amount of meta-speak is going to furnish the fact that Kelly just dropped his singer-songwriter statement, and that it sucks, and that there's a song on it "about a girl that's with a guy and then she finds out she doesn't wanna be with that guy anymore and she finds another guy and he's the first guy to give her an orgasm" ("Liberty"). It could have been funny, maybe with a Kool Keith guest spot, some Cuban cigar cutters. I mean, at least with his band, Jones was able to salvage some vestige of pastiche and Allman Brothers nostalgia, but here he's dead-eyed and sobered up: Only The Names Have Been Changed is stultifying, uncompromisingly consistent -- a shitstorm cadenza that makes a mockery of this "pared down" sincerity.

The muzak atmospherics are cloying, the chord changes entirely and depressingly accountable. With no groove to fall back on, the paucity of the writing is transparent: the songs go nowhere, they dawdle. Most of them are indistinguishable but for the lumpy way Jones wraps his slow-croak around the various names: "Violet," "Misty," "Jayne." "Jayne" is the long song, "Violet" is the short one. The others are somewhere in between. Review that. Take a long hard listen at its hard-line, unflinching nothingness, all vacuum-soured and sterile and tell me you can pull something interesting out of this moribund mess.

Because I really don't think you can. But, whatever, bring out the big guns, Abu Joyce: polysyllables and Cliff's Notes -- let's have it.