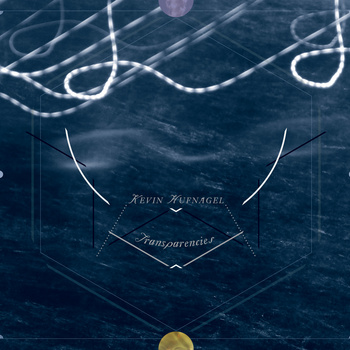 Wikipedia played a huge part in the writing of this review. Don’t judge. I know nothing about Kevin Hufnagel. He emailed me, I listened to his album and really enjoyed it. I found, with some surprise, that he has his own Wikipedia entry. (We still don’t, by the way.) I apologize for nothing.

Thus the following points of interest: 1) Hufnagel is a former member of a progressive metal band called Dysrhythmia. 2) Dysrhythmia is also the medical term for jet lag. 3) He was a member of a “technical death metal band” called Gorguts, though I can’t imagine anything non-technical still qualifying as death metal. 4) Gorguts is from Quebec, which makes all kinds of sense. 5) Transparencies is, as far as I can tell, Hufnagel’s first foray into something you could call an ambient record.

Here’s the point: if this really is Hufnagel’s first ambient record, it reminds me of, and I think is almost as good as, Eluvium’s nigh-classic 2005 album Talk Amongst the Trees. I imagine that for anyone with a passing familiarity with that album, that’s all the endorsement required to at least check Transparencies out.

For the rest of us, understanding Hufnagel’s history with metal and how Transparencies might be connected makes sense in the context of what Eluvium achieved. Christopher was right in his Talk Amongst the Trees review to make the link between that particular offshoot of ambient and post-rock, and even righter to make the link to both sub-genres’ gradual tailing off in the wake of all-too-real attacks on New York and Washington. Eluvium made a case for the stylistic sisterhood of theatrical rock music and ambient’s, specifically their cerebral negation of space in favor of high concept. That suddenly even the most cynical, dystopian thinkers lost some appetite for speculation about just how low humanity sinks is sort of beside the point. We were ready for pop music again, patriotic country tunes, but having post-rock and death metal musicians makes ambient music unfolds nuances in an already diversifying genre.

Like Eluvium, Hufnagel has created a cyclical album of patient but purposeful beauty. Transparencies is equally an ambient album and a minimalist rock album, as if standards of music writing have been placed at great distances from the listener and are allowed to echo faintly in our direction. Transparencies simultaneously accesses rock customs recognizable enough to be listened to without much critical conceit, and insists on them as an elaboration on ambient’s underlying formula. It initially preempts the impulse to dismantle—i.e. is infectious and likeable in the short-term—and then invites dismantling anyway—i.e. is likeable in the long-term. In other words, it takes the best of rock and the best of ambient and combines them in a vital and resonant way.

“Slow Motion Return” and “Static Aquarium,” for example, are little more than very nice guitar lines arranged over some ambient threads of noise; there’s no need to place it in a conceptual framework or to categorize it. It’s so old fashioned that to label it does little to help us understand what it’s designed to do. On the other hand, the shimmering, barely existent “Passing On,” which immediately follows, invites the listener to make more of the spaces and the creeping, inexorable sense of minor-chord dread, which lays eggs in your brain.

Or take “Ever Rest,” which, with a beautiful build, develops a second coda, finds an upper register around its third minute, and escalates the song to a place generally reserved for those dramatic fixtures of the post-rock set; the song simply demands more performativity of ambient music and its listeners than we’re accustomed to. “Arferno” might fit more conveniently into our wall-of-noise conception of what melodic ambient should be, but nestled as it is in this album’s confident, stately playing, it acts as a bridge between two tactile notions of melody and texture. Hufnagel is playing with the component parts of ambient’s various trends, and doing so in a way that is unusual given his relative newness to the genre.

Produced with a guitar and its attendant effects—no samples or other instruments—Transparencies is an example of an artist who imposes boundaries on himself only to then push those boundaries. Another way of putting it is that no excess or unnecessary methodologies were employed to produce this album. There is no virtuoso display of otherworldly technical skill here (though you can see some of that on Hufnagel’s last album, Songs for the Disappeared [2009], which has a few traditional acoustic performances), only the masterful arrangements of a knowing aesthete.

As a consequence, Transparencies feels as if it has weight and substance, is an artifact of an idiosyncratic, rather than combinatory and post-modern, time. The notion that something produced with tactility and difficulty has greater authenticity is a flawed one, but ambient is one the few genres more forgiving of the sentiment. Ambient is about strategic subtraction, after all, and Transparencies, like Talk Amongst the Trees before it, has the felt sense of corporeality and sentimentality that this subtraction engenders. One suspects, or has no difficulty imagining, that this music was derived from something rather than merely appearing from accidental collision of samples and references.

And yet all of what I’ve written here makes Transparencies “just” a good ambient record. What elevates it to a good album, to be enjoyed regardless of how you feel about ambient music, is that it’s also so effortlessly listenable, unpretentiously conceived, and just plain beautiful. It’s clear that Hufnagel is bringing a considerable comfort with songwriting to the equation, whether it’s his experience playing Quebecois metal or solo acoustic guitar. With the perspective of an outsider to the genre, he’s distilling some of what can make ambient so immediate and resonant—some of what is often lost as the genre’s best-known artists turn it on its side. Transparencies was released too late in the year for consideration on 2011 year-end lists, but I can say now that it certainly would have been on mine.