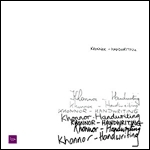 There is nothing so coveted, cherished or over-hyped in the music world as young, legit talent. Witness the festival of hype surrounding teens-when-they-started hypelets Connor Oberst, Patrick Wolf, Alicia Keyes, Aaliyah and countless other neophytes as they rise through the ranks. The interest in these young’uns is fueled as much by their age and inexperience as it is by any notion of talent. But interest tends to reach a fever pitch when it becomes apparent that the ascent is about something more than just another jail-bait jubilee proliferated by a major label looking to cash in on horny teenagers. The supposed difference that makes music aficionados go hog wild is talent, that elusive quality that if possessed by someone not yet old enough to drink is an intoxicating elixir indeed.

Since pictures of Canadian 18-year-old Connor Kirby-Long are rather hard to come by, and rumor has it he traipses around in a shirt that reads “I’m Not Khonnor,” it seems that this youth is not being subjected to a sexuality-based teen marketing campaign. Interestingly, Khonnor is also not about to be pigeonholed with troubled teen troubadours Oberst (well, once teen) and Patrick Wolf. He’s not anywhere near as brash or as lyrically confessional as either lad, and depending on your thoughts on either, it can work highly to his favour.

Khonner is incredibly indebted to a slew of influences that don’t necessarily hold him down as much as reveal his interests. But, as the album title (Handwriting) admits, the child is still finding his voice as he learns to make music. It’s incredibly difficult to make music this early on in the process and not wear all sorts of influences brightly on sleeves; to his credit, Khonnor deals with them fairly well, never sounding like a rip-off---though never sounding completely original, either.

Mainly recorded in his bedroom using an archaic computer, a free microphone, his guitar and some crappy speakers, Khonnor dabbles in light, airy electronica with occasional guitars over vague, washed out vocals. He’s drawn a fair amount of Loveless (1991) comparisons, but, while clearly rooted in the shoegaze, the album is no tribute. In fact, comparisons to Fennesz seem just as valid as those to Slowdive; Khonnor deals in aural washes, layered melodies and tape looped guitars and drums. He maintains an incredibly light and ethereal mood throughout, keeping the content of his cryptic lyrics buried under a gorgeous sheen of diaphanous electronics and fuzz.

Opener “Man From The Anthill” features a beautiful fuzz effect, with Khonnor asking, “Oh Jesus, won’t you hold me?” It’s not so much an actual plea as a melodramatic moment from a kid who was 17-years-old at the time; and though this lyric might suggest otherwise, the album is surprisingly light on the melodrama. Most of the emotional over-wrought-ness is expressed through fluttering digital waves, undulating more expressively than anything such a young heart could express in words. When some of the lesser lyrics do slip through, as in “Megan’s Present" (“Can you hold this for a while, it’s a homesick pile / It’s my broke guitar, and if you touch it, it sings tunes"), they can come close to ruining the song. You have to think that with time, this immensely talented kid will learn when to reel in a stray lyric and let his sizable sonic palette pick up the slack.

“Kill2” begins with a gorgeous piano melody that’s joined by fuzzed percussion and Eno-esque keys, reminding one of Shugo Tokumaru’s fine Night Piece. “An Ape Is Loose” is rich with dark texture, while “The Stoned Night" features intensely layered keys and percussion (one of them seemingly the guitar riff from “Walk of Love”) that swirl in stutters before one beat gives the song a direction. Handwriting ends on a particularly Fennesz-y note with “Tattletalent,” a complex aural barrage of washed out keys.

Some might be turned off more by the attention given this neophyte than any actual music, but it seems far too early to truly judge Khonnor. This is a fine debut that shows a young artist learning how to express himself, and he is clearly more comfortable at this stuff than some others. At the same time, it’s a record that is obviously very raw in many ways, and, as such, it will either be fondly looked back on as the beginning of a long career for Khonnor, or unfortunately remembered as another footnote in the game of over-hyping a young musician before he's able to fully develop. Once again, here’s hoping for the former.