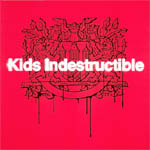 The French label Gooom seems incapable, utterly and completely, of doing wrong. First M83, then Cyann and Ben, then KG, then this new mini-album from Kids Indestructible.

Excepting Cyann and Ben, this small label's major theme from what I've heard so far is bombasticism (my word, invented on this very day). It only takes Kids Indestructible (a.k.a. Tim Robinson and Phil Quaite) a minute and a half, in their opening title-track, of introductory pounding snares and kickdrum, handclaps, and sampled guitar, to soar into joyous heights of deliriously beautiful sound. When a second sampled guitar scalds its way across the steady rhythm at around the second rhythm, it's a simple concoction that takes on the heart of revelation. A simple, single hook carries through a few measures before each element is broken down, dismantled, and shelved for re-use in a few more measures. When it cuts out and its initial melody is overtaken in the following track by stand-alone sampled, water-warped vocals that can barely be made out to say "Please Avoid Strong Light" (also the title of the track), there's no doubt as to the attitude of this EP: liberated, full of life, and confident. More simply, heart-warming.

I might be wrong, but isn't there something distinctly warming about the fact that so many Gooom artists work with one another, sample one another's work, and contribute with immense unselfishness their efforts towards their label-mates' pieces? You'll see that M83 remixed "Trans Pennine Express" and that Abstrackt Keal Agram remixed Please Avoid Strong Light for this EP as tracks four and five, respectively. And when the results are this good, it warms your heart even more.

M83's remix of the title track is a great treat, with the initial keyboard line kept the same; but the tempo is drastically slowed down, the drums all but disappear, and a minor key is inflected onto the original foundations of the song via oscillating synths. Plaintive sampled guitars work off each other in meteoric rises and tumbles, and cement the more melancholy, drastically different mood of the piece, before they all but vanish, leaving the original keyboard line swamped in lonely reverberations. The tension over the course of this interlude grows immense before a drum arrives in scatterbrained thumps and taps and all three sampled guitars return with a glorious, livid vengeance, a beautiful synth line intertwined deftly between their ascents and cascade. The melody of it is overwhelming, and stays for a few cathartic measures before everything recedes into a single stark layer of brief, ghostly synths.

Abstrackt, on the other hand, takes a diametrically opposed direction on his remix of "Please Avoid Strong Light," interspersing sampled, Matrix-esque sampled flows amongst the progressively darker dance-vibe that he immediately pushes onto the track. A deep cello is brought into the mix before the introduction of a mellow, pushed-to-the-front piano line by means of a soulful chorus of voices that evaporate as soon as they appear. It's not quite as successful as the M83 remix; the rap flows, in the context of the actual EP, as opposed to standing on its own, is a bit awkward, disrupting the mood of the disc; and the darkness of the track only serves to accentuate this marked difference.

The coup-de-grace, though, is the remarkably delicate, fragile (and original) "Item One," the closer, and most interesting track on the EP. Eschewing percussion for the internal rhythm of angelic, sampled, pulsing layered vocals, under which is laid a light and determined piano line. Gradual introduction of reversed synths shimmering their way across the song's first elements blurs the mix into a druggy haze of electronic glitter, before, in a completely unexpected shift, a deep bass synth emerges from a hidden underbelly to take over. It's presence immediately shifts the emotional balance of the song to darker regions, and though the angelic vocals and warbling synths remain, the tone remains completely different for the remainder of the track: intense, swirling, full of an almost mystic wonder, as percussion finally arrives in the mix like a stomping, deliberate god. New synth elements are smartly introduced, higher in range than their predecessors; they serve as the perfect transitional elements for the drenching evolutions of synth that soon arrive to almost discombobulating effect - by the sixth minute you're hopelessly lost and entranced in the confounding and different wash that has so organically grown out of its innocent roots. Three minutes of silence later, strange, pure-toned synths arrive to form a kind of belated cleansing.

In fact, the only thing that really brings the EP down is its similarity, in some ways, to M83. It's not overly ambitious, nor particularly divergent from much of the Gooom catalogue. That's really the only picking point I can find with it, beyond the somewhat ill-chosen Abstrackt remix, which just doesn't work within the internal movement of the EP like its companions. Because as much as the Gooom sound is a great one, a little bit more variation could only help; KG recently demonstrated precisely how.

But for now, Trans Pennine is more than enough of an enticement to stay interested in Kids Indestructible and their future efforts -- it's quite a bit of material for an EP, clocking in at 36 minutes, so the investment is well worth it, if you can find it. And chances are, you'll want to find as much as you can from this Gooom entity; they have the serious potential to become quite a power player in the indie scene. I've got my bets placed.