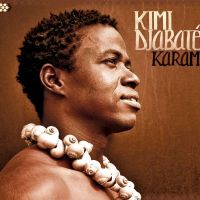 Kimi Djabaté, a griot from the West African nation of Guinea-Bissau, was literally born to play music. Hailing from Tabato, a village famous for its griots—hereditary bards charged with telling the oral history of their tribe—he first learned to play the balafón, a resonant African xylophone, when he was three years old. From there, he learned to play kora (an African harp), various traditional percussion instruments, and guitar. But being a talented musician in a poor musical family had its drawbacks: he was often forced to sing and dance for money.

Djabaté has lived in Portugal since 1994, which led to another set of struggles. This personal history resonates through his second solo album, Karam, in unexpected ways. Its fifteen tracks are guided as much by layers of percussion and glossy stringed instruments as Djabaté’s longing lyrics, giving an otherwise uplifting set of songs a somber quality. “Mulo-nhaneta / Mulo-torrota-je,” Djabaté sings in the title track, in his native language of Mandingo. As bright strands of kora (African harp) and acoustic guitar float over an upbeat rhythm, these lyrics offer a sobering reminder: they roughly mean, “People suffer so much / It’s a tiring experience.”

Following the griot tradition, many of Djabaté’s songs pay tribute to important people—his mother (“Ná”), a strong woman named Fatumata (“Fatu”), a man who has lost his wife (“Dabô”). Using the tribute song as a framework for discussing society, he criticizes the inequality that many contemporary Africans face, critiquing male chauvinism, misogyny, economic inequality, and ethnic prejudice. But the music is often simultaneously dismayed and beautiful: over the sublimely slow beat and wandering balafón of “Mogolu,” a chorus intones, “Yo mogolu mancaynhan”—“How come some have so much and others have nothing?” In that way, Karam is anything but hopeless. Indeed, more than once, Djabaté tells the listener, “Dance!”—and tracks like “Mussolu” and “Manla,” with their invigorating Latin-style grooves, are perfect for doing just that.

The slow, elongated woodwind refrain of “Kodé” exemplifies the suffering that Africa has experienced over the years: the strident anthem of African independence fifty years ago has evolved into a funereal dirge. In recent months, Guinea-Bissau itself has endured shocking political instability. With Karam, Djabaté highlights the kinds of prejudice that have contributed to this suffering. But his music feels like a kind of salve, glowing with optimism over words aching with sadness.