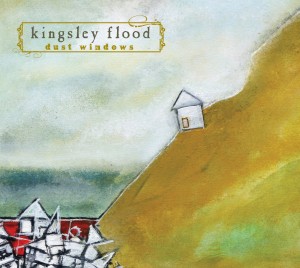 Now here’s a good starter for anyone wishing to shake hands with Americana, even those who’ve shook its hand before and had their palms dirtied, had their rings stolen, and caught warts. Kingsley Flood are fresh out of Boston but speak with all the grizzled savvy of Martin Sheen in The Departed, still smarting from the fall he took from that office block but saved by landing balls-first on a horse. Frontman Naseem Khuri has fallen from a few office blocks of his own—his unlikely folk beginnings started with a post-grad career as an international diplomat, sabotaged by Khuri himself in A Moment Of Clarity so he could scale down to a quiet office job. Unfortunately there isn’t one, and after unraveling on coffee and appraisals and deciding on a whole new U-turn—lower-case this time, one with a hooked serif to ski-jump you out of the car park—Khuri walked away into a haze of denim and banjos, forming the Flood shortly after. He’s assembled his crew here carefully (Nick Balkin, for one, the rising bass guitarist who put the glimmer into Logan 5 and the Runners) and has stuck down eleven songs about characters musing on missed opportunities: some too old, some too eager, and some just too denim and banjos. The thing that binds them all is their dough-eyed but rough-hewn unpretentiousness; this is Irish rebel music but without all the instructions on how to make Molotovs and paratrooper accusations.

Dust Windows‘ main selling point is its balance: for every pensive croak and high tempo Stetson are downtrodden heels in equal measure. Khuri and his team have a knack for mixing curiosity with dashed trad in a way that belies their experience; you’ve only got to compare “Good Enough”‘s loner stream-of-consciousness (and lyrics appropriated from an old Dodgy hit) to the mandolin stings of “Cul de Sac,” where Khuri’s chant of “I’ve got my thumb on the pulse of the nation” jostles with scrambling jazz drums. This cowboy adaptability carries Kingsley Flood across entire strips of the country, fading into prairie pink sunsets one minute (“Cathedral Walls”) and riding shotgun with fiddles the next (“Back in the Back”). When the mood requires him, guitarist Michael Spaly counters with a whole utility belt of guitars: madcap banjo on “Devil’s Arms” or the smooth electric waves of “Eventually.”

Lyrically, either Khuri saw some shit during his false start as a diplomat or he’s been a barfly in all the right places. His stories range from dark to light to blinding, all spilled in the shadow of cacti. Khuri’s humour, on the other hand, is as frisky as you might expect from someone attempting the seasoned country look, but sufficiently tongue-in-cheek: ““Well I was born in record time / Potty-trained when I got home / I grew a moustache by age nine / And by sixteen, on the road,” he raps on “Stoop Cats,” reacting to SATs and competitive childhoods in a way angry parents just aren’t allowed to. The car-love payoff of closing track “Just a Midnight Ride” is light-hearted in a life-affirming kind of way too, our cuckolded narrator thanking his stars that the battleaxe left him the Mustang. “These days my bed is so big but I like it that way / I like it that way,” he taps, sinking into the shaggy shoes of singledom with a hillbilly lilt to his voice.

On the whole, Dust Windows feels more like a celebration than it does a sympathetic shoulder, full of enough Bay State sun to ship out those blues regardless. Some of those Whacky Races drum beats could bring down a country wedding or two, and if you’ve got a prejudice of fiddles and bluegrass you’ll need to inch into this one like a bath. When you’re in, though, there’s rubber ducks a-plenty, and Balkin and Khuri’s band of brothers (plus sister Jenée on strings) make for an eclectic small town posse. They’re flighty, they’re shy, they strut and they serenade. And they also play a Belle & Sebastian trumpet line.