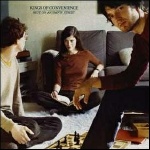 Riot on an Empty Street

You probably wouldn't expect a duo that has spent three albums imitating Simon & Garfunkel's unmistakable harmonious folk to have much of an "edge" or artistic slant, and, congratulations, you'd be right. Erlend Øye -- the geekiest looking half of the Norwegian duo Kings of Convenience, which also includes Erik Glambek Bøe -- has spent most of his time between KOC records (their last, Quiet is the New Loud, not counting their collection of remixes with Versus, came in 2001) heading in a more electronic-oriented direction, first with his disappointing 2003 solo debut Unrest (loaded with more guest spots than most commercial hip hop releases) and then with his recent, and far more successful compilation DJ Kicks, which spliced a few of his own works with a slew of other selections, including Cornelius' excellent "Drop" and one of the the Rapture's few worthwhile moments, "I Need Your Love."

But Øye's side-projects remain just that, as, not that surprisingly, Riot follows almost exactly in the hushed autumnal folk of Quiet and their eponymous debut (2000). Even though the group has flirted with similar electronic flourishes in the past (albeit almost exclusively on Versus), and lord knows they could use the variety that it would offer (even with the results we heard on Øye's solo debut, which left quite a bit to be desired), we get more of the same Simon & Garfunkel aping. Only first single "I'd Rather Dance Than Talk With You" (an enjoyable, if slight, detour into mid-tempo folk-pop with the album's most ambitious production -- which really doesn't say much, to be honest) and "Love Is No Big Truth" (an incredibly subpar attempt, at that) really break the album's mould: another uniform attempt of two talented singer/songwriter's in an eternal quest to write their very own "Old Friends/Bookends."

But the same lack of diversity didn't stop Quiet is the New Loud from being an astonishing step up from their debut, and though this is hardly the same kind of jump, Riot may just be their most consistent collection to date -- even with a lack of incredible standouts like "Winning the Battle, Losing the War," "The Girl From Back Then" and "I Don't Know What I Can Save You From." They do come close on a few occasions, however; the gentle shuffle of "Misread" (which ends up being far less of a personality-less soft-rock ballad than its intro lets on) being the closest they come to rivaling their previous best, though even its gorgeous harmonizing and remarkably crafted progression tend to get muddled in the album's monotonous haze.

The two songs that bookend it, for instance -- opener "Homesick" and "Cayman Islands," the former of which even adds lyrical references to "two soft voices blended in perfection," making the track's already uncanny semblance to Paul & Art all the more tongue in cheek, though it remains uncertain if the group is in on the joke or sincerely adding to the homage -- are virtually indistinguishable from one another, and the unrelenting sense of deja vu doesn't stop there. "Surprise Ice" closes out the album, and though delivered with a greater sense of melancholy than what followed it, it still doesn't differ from the aforementioned tracks in any discernable way. Other highlights like "Stay Out of Trouble" and "Sorry or Please" (a re-telling of "Misread" with a slightly broader arrangement and one of the record's best choruses) -- surprise, surprise -- sound much like all of the above, though their ability to pull as many hooks as they do out of such a basic, repeated form (which has been constantly copied and re-sold for decades now) remains their key talent.

To describe the rest of the album's cuts would result in much of the same "hushed folk/continuing to sound like Simon & Garfunkel/impressive harmonies/nice enough melody" descriptions with empty adjectives and the sense that you'd just read the exact same thing two seconds before. Which would actually mimic the experience of hearing Riot quite well, though without giving credit to Øye and Bøe as being pretty much on top of their game, whether we agree with their stubbornly one-track approach or not. At this point, we can assume with a fair amount of certainty that they won't be throwing a diverse masterwork our way any time soon, and if the most we can ask for is a consistent run through low-tempo folk, Riot is probably as good as they're going to give us.