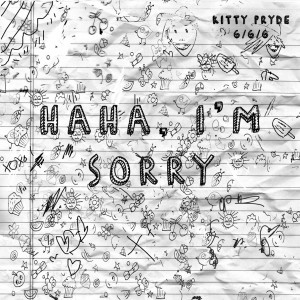 I think it’s probably safe to say that by now, three-plus months after the release of her “viral” sensation “Okay Cupid,” most of our readers will be familiar with and perhaps even have an opinion of Kitty Pryde, the young female rapper who, in her own words, is “ruining hip-hop.” And I suspect it’s safe to say, too, that a great many of you will have dismissed her whole schtick about thirty seconds after hearing of it. An effusively positive review now, then, probably seems like a late and certainly rather odd gesture. But it seems to me that the best—indeed, maybe only—way to deal with her 17-minute sizzle reel of a debut EP is to pop the proverbial cork and simply let it breathe, which in this case means keeping mum about its many merits until the requisite hype cycle has had enough time to wind down. The idea, in other words, is to just sort of shut up and engage with ha ha I’m sorry more seriously than any of its blah-blah contextual nonsense (or, y’know, that title) suggests one ought to.

Part of the problem, I suppose, is that on the surface ha ha I’m sorry seems, at best, to be a piquant but ultimately pretty vapid guilty pleasure. It isn’t difficult to imagine a contingent of Kitty Pryde fans whose principal interest in this material is ironic and zeitgeisty, embracing it as meme more than as music. Pryde herself does little to suppress the veracity of such a reading: from the overtly jejune giggling which closes out the opening track to titles like “smiledog.jpg” and “ay shawty: THE SHREKONING” (emphasis most definitely hers), much of this registers, at first blush, as little more than self-aware trolling. The impulse to sneer, then, is motivated at least partly by a kind of critical self-preservation: nobody wants to be caught falling for the joke. And anyway, isn’t this entire half-hearted enterprise predicated on a young girl’s desire to goof around, as she admits on “smiledog.jpg”? Doesn’t lauding this kind of jokey, fundamentally nonchalant rap devalue hip-hop’s basic tenets of earnestness and authenticity? Isn’t Kitty Pryde just straight-up a bad rapper?

Yes and no. Kitty Pryde is not especially gifted on the mic. Her flow is mealy-mouthed and timid, and her disposition swings only from sedated (“okay cupid”) to pleasantly demure (“ay shawty”), though it’s often hard to distinguish between the two. But like the Main Attraktionz—not exactly the most technically proficient rappers on the planet either—Pryde has the distinct advantage (and plain good sense) to surround herself with beatmakers whose aesthetic is precisely suited to her distinctive brand of vocal sedation. Her hushed, dilatory delivery might not work on a track by Swizz Beatz or the Neptunes, but steeped in beats by GRANT and Beautiful Lou, purveyors of cloud-rap par excellence, Pryde’s a babe in dreamland. Suddenly something precious and delicate sounds quite purposefully assured but dreamy, hushed words disclosed in a whisper. The effect is striking: rap rarely sounds this moody or atmospheric. If you’ve ever felt that Lil B rapping over Clams Casino beats generates nothing more than cognitive dissonance, Kitty Pryde will sound like a solution that should have been perfectly obvious: this “night bus” stuff needed a rapper as a somnambulant as the sound itself.

And as far as trolling is concerned, Pryde engages in it first and foremost as warranted defense: her willingness to poke fun at herself gives her the edge over those who’d readily laugh her off. The sensibility driving ha ha I’m sorry is best summarized, I think, by “smiledog.jpg,” the highlight of this brief EP. In and around references to Danny Brown and the Bruiser Brigade, Pryde accuses her haters of being basement-dwelling losers, fretting and obsessing when they claim not to care. It’s the ultimate backhand to the kind of hype-machine backlash hurled at new, trendy upstarts: “you say this little white girl is ruining hip-hop,” she says with a giggle, “and I say damn right and take a lick of that ring-pop and smile.”

Does this qualify as trolling? Insofar as it goads the oblivious into responding, sure: she’s baiting the haters as much as she’s making new fans. But in the sense that, yeah, she’s actually right—anybody bothering to complain about Kitty Pryde rather than just ignoring her is sort of validating her impact—what’s essentially smack talk comes off as fairly unimpeachable. So much about the way we tend to consume and engage with new music is ridiculous, and part of what’s so interesting about ha ha I’m sorry is the way that it plays into that conversation while openly recognizing its faults. If that makes it “post-internet,” Grimes-style, fine. I’m sure Kitty Pryde would laugh at the suggestion in much the same way that laughs at her haters. More than most, she’s got it figured out. She doesn’t take herself seriously, but she does take her music seriously—and that’s a distinction few understand, let alone practice. The potential for obsolescence is almost a given; even Pryde herself seems to joke about being a meme. But how many artists manage to produce a breezy, satisfying hip-hop EP that capitalizes on its own buzz while criticizing the system that helped generate it? That’s worth a response, even if followed by a giggle.