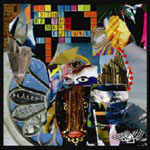 Myths of the Near Future

If life has taught me one important lesson, it is that a piece of fried chicken is more reliable than my favourite bands. Playing favourites, as Clay pointed out in his tutelage of the last Jay Sizzle joint, can be a dangerous thing. Functioning supine and parasite-like on uber-fan message boards to wait for the latest leak news may be construed as a sign of dedication and/or anoxia, but, alas, is not yet universally acknowledged as a form of psychosocial health. Conversely, becoming too distant and bookish about the hype scene might help air a sense of cultivated cool, but, in its extremes, is conducive to even greater feats of dickishness, like hating on a perfectly good record because politicos kick back to it.

Enter Klaxons, the latest (and, by no means, the last) in a long line of acts whose musical achievement is ultimately stifled by the erupting media razzmatazz lampooned upon them. Whether Myths of the Near Future will be able to stand separate from the fog of the useless 'new-rave' label is something only time can tell: what can be ascertained now is that it is an accomplished, surprisingly traditional and altogether unsurprising effort that warrants little of its concomitant media storm.

Rather than being groundbreaking, the band, rather shrewdly, summarise the last four years of indie post-punk (read: throttling rhythm section, skewered guitar lines, superfluous synths), filter the patented style through a series of day-glo, bankable hooks and refract the whole through a sci-fi, literary-copping medium. And all credit to the group: more often than not, it works well. "As Above, So Below," with its serpentine synths and glassy-eyed glam draws favourable comparisons to Trompe le Monde (1991)-era Pixies, while the relaxed "Golden Skans" and ballistic "It's Not Over Yet" are hyperdosed on deft melodic turns and banner choruses. James Ford's panoramic production does well to expand on all frontiers of the song, not merely adding a commercially palatable sheen but providing the full-bodied thrust that lets the tidal grooves of the more raucous tracks resonate with a satisfying openness.

What sets Klaxons back is the same sense of formula that will probably prove their most profitable asset. Songs like "Gravity's Rainbow" and "Totem on the Timeline" follow titular noise rock with arch, anthemic breakdowns, not so much using shock tactics to construct some cheap sense of tension and release, but more so to pander to the non-discerning listener, as if to instruct them through conditioning and repetition: this, friend, is the part where a glow-stick comes in handy, and that, that is where you chillax. I guess this kind of dumbed down standard-bearing pizzazz could be really helpful is you're sweating, dehydrated and frazzled out on angel dust, but it inevitably becomes grating on record, to the point where you wish the band would lose the permutations and try their hand at something different, like reggaeton or stand-up.

But, I suppose, being adventurous is not part and partisan with the Klaxons schtick. As it stands, Myths of the Near Future is probably the most assured British debut since Franz Ferdinand's self-titled, whatever that's supposed to mean.