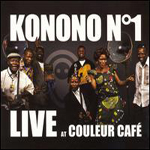 The checklist of a Konono N°1 review runs as follows:

1) They’re Congolese. Most of their listeners are not.
2) Their three likembé, which are like thumb pianos, drums, and amps are assembled from junkyard detritus, giving them both the aesthetic and sound that makes DIY enthusiasts wet their pants. That means a lot of indie kids like to explain Konono N°1 to each other.
3) Their founding member, Mawangu Mingiedi, is four hundred and thirty seven years old, and adorable.

And so, theirs is a kind of quote-unquote World Music that successfully straddles the divide between the corporate festival’s armchair ethnomusicologists, record bin divers in search of the obscure, and basement club dancehall populism. (Never mind that they predate most of these divisions by a good decade.) And, though their differences distinguish them, that they’ve found such purchase in the West makes any review of their music as much a fractured evaluation of their crowd as of their album. It’s unfair, for the most part, and largely besides the point—unless, that is, they were to release a live album. Then, suddenly, the impetus to look at audience, particularly for music as participatory as this, isn’t quite so problematic.

I feel like any discussion of live albums in 2008 has to mention Daft Punk’s Alive, an idea that sprung from bootlegs realizing any crowd large enough is an entity worth documenting in itself. Well more than half the fun of listening to Daft Punk run through a hit-and-miss list of their most recognizable hits was upending oneself in the roaring surf of the crowd’s response. That same exact experience can’t, and shouldn’t be, mapped to Konono N°1 for a number of reasons: theirs is not music one can easily sing along to; their music is about long-standing grooves rather than frequent changes; their crowds aren’t as big. Still, I approached this disc knowing that the experience of a live Konono N°1 show far surpasses that of their albums. The music is more fun, more accessible and yet more exploratory, exhausting in its length and encompassing. Any live document of one of their shows must heighten those facets of their music that benefit from social, rather than just homemade, amplification.

The most glaring deficiency of this disc—its lack of crowd noise—is thus made disappointingly apparent. Beyond the distance sounds of applause when these juggernauts of distorted bloops come tumbling to their ends, the band sound removed from the audience. The few Konono N°1 shows I’ve attended have been sweaty and fatiguing in the best possible sense, privileging the physical in mantra-like repetition over the intellectual. But without a crowd at least as present as their sonorous bleat, Konono N°1’s music can be tiring in exactly the opposite way: it can become repetitive and boring. Telling that the intros and outros to this disc are largely indistinguishable from the songs they bookend except for those fluent in the band’s discography.

As a listening experience, Live at the Couleur Café is an adequate documentation of the band’s unique sound, though no more so than their albums. The addition of the odd chants, whistles and rougher beats is embellishment of the shortest order for music so dense. But it’s as a replication of their live experience that the album is practically non-existent and borderline pointless. This ruckus doesn’t seem nearly inviting enough because of its seemingly solitary performance.