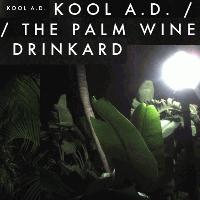 It’s hardly a surprise that a solo mixtape from Victor Vazquez, a.k.a. Kool A.D., is messy and directionless. His day-job stint in Das Racist is fueled by indecision: are they stoners who just want to party on, as on Shut Up, Dude (2010), casted as the smartest dumb guys in the room while telling jokes about The Martin Lawrence Show and dropping lines like “white people’s skin is their jewelry” with equal aplomb on Sit Down, Man (2010)? Or are they the dumbest smart guys in the room, as on Relax (2011), making us all feel like assholes for liking them? They’ve been avant-garde (“Free Jazzmataz”) and reggae (“One Dollar Can”). They have been the best rappers on the planet (“Rapping 2 U”) and the worst (“Combination Pizza Hut and Taco Bell”). They are joking. Or maybe they aren’t.

So it’s only fitting that the degree to which The Palm Wine Drinkard is without any coherent guiding force makes what Kool A.D. offers somewhat arresting. I struggle to find a comparable release this schizophrenic, this mesmerizingly mixed in its aims, to the point that should someone listen to this blindly they would be hard-pressed to conclude it was all created, written, mixed, and recorded by the same guy, let alone that it came from the same album, or that it had arranged in an order the artist deemed coherent. Then again, Vazquez has made a fledgling career from incoherency.

Consider the five track run from “Titties Out” to “Fun.” The former plays like an obnoxious interlude Spank Rock alone would find tasteful, with effects-laden vocals seeping out blankly stupid lines like “girl shake your titties” (x10), “move your pussy down south / take your titties out,” and “pussy pop (7x) / don’t stop.” Because Vasquez is both the dumbest smart guy in the room and the smartest dumb guy, “Titties” is a difficult song to categorize—Parody? Homage? Dare?—as much so as Das Racist has always been, but the song is first and foremost laboriously repetitive, about three minutes too long. Its succeeding track, the Relax-cribbed “Booty In The Air (2009 DJ Prick Nasty Exclusive)” doesn’t prove to be much of a reprieve from all the confusion, trading boom-bap percussion and chopped-and-screwed pacing for breakbeats and breakneck speeds, and then ending up just as shallow. Seriously, did that song need a remix? “A Ganglion of Lightnings” is Kool A.D.‘s damnedest impression of Frank Ocean, fairly accurate—it does sound a lot like an Ocean cut—but also fairly unimpressive, lacking the little vocal dexterity Ocean can display. “Girls and Women” attempts some crossover R&B/chillwave a la Ford and Lopatin’s “Break Inside,” minus the heavy ‘80s influences, the better vocals, and the more impressive drum programming. Finally, “Fun” is six minutes where Vic turns into James Murphy and I turn off my ears.

So, all that: not exactly kindred spirits, and not exactly complementary in any thematic or chronological order. But even given our current and ever-pressing penchant for singles, no single thing really jumps out as a song on its own. In fact, Drinkard’s sole outstanding track is “Eight Elvises,” which would be one of Clams Casino’s better works were Clams Casino its creator, but as a piano-based, drowsy, samples-only song it is also the most out of place next to, you know, “Titties Out,” the “Booty in the Air” remix, and “Fun.” And filler is fine; filler serves as the glue for a consistent artistic statement. But filler from nine or ten separate genres?

After his success as a part of a hip-hop duo, why he would want to revert back to the electro-douche tendencies of his old band Boy Crisis—the one Pitchfork felt inclined to apologize to the rest of the world for on behalf of America after the Iceland Airwaves Festival—is beyond me. There’s nothing on here that’s rap in anything but the most generous sense; considering rapping is the one talent Kool A.D. could showcase, it almost negates this mixtape’s existence. “Lagrimas Blancas” very well could have been—scratch that—should have been the one actual rap track to make the cut (though thinking he even made raps that were cut might be assuming too much), but over the song’s plundering, boldly cool beat Kool A.D. is content with just explaining what he is: “in Barcelona,” “Ronald Reagan,” “in a swimming pool,” “James Murphy.” Just a little over a year ago this guy was half the creative input on our seventh favorite album of the year—the blurb titled “HOW DAS RACIST MADE THE MOST INTERESTING (IF NOT THE LIKE “GREATEST”) RAP RECORD OF 2010” no less—now I’m wishing he would pass along dope beats like this to Danny Brown.

It’s actually quite revealing that Vazquez intones Murphy, both in word and song, because this is the second release in a row where Vic has that same attitude: a self-awareness of how ridiculous celebrity is, but a condescension towards those who make him so. (Heems is probably the same, but I’m withholding judgment until Nehru Jackets drops next week.) Everything becomes an act disguised as reality disguised as an act, that kind of bullshit “I’m being outrageous and making fun of anyone that takes me seriously” front that greases the oily “Drunk Girls” for Murphy, and subsequently “Titties Out,” “Booty in the Air (2009 DJ Prick Nasty Exclusive),” “Girls and Women“…well, the whole mixtape.

The shittiest part is that, unlike Murphy, Vazquez hasn’t always been like this. Before, Das Racist was motivated by subtly destroying anyone who assumed Das Racist was a joke group because they are young, are stoners, etc. It was Vic that spit, “See me grace the pages of your favorite Conde Nast Publication / They asked me all about my views on relations of races / And cut out the radical shit for space, that’s racist,” to batter those that would repurpose his feelings into more “tasteful” expression—while leading into it with “Finna eat more rice than Condi / Nasty.” But his attention has moved from the people that only expect ignorant shit from him to the people that expect something good from him, and thus he’s transitioned into mocking them as well. Based on this mixtape, at least, clearly it’s time we started expecting much less.