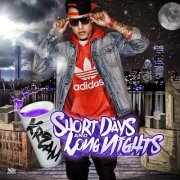 Kream’s Short Days and Long Nights is nothing if not an example of the rap game’s excesses. Not of the showy sort that gets flack from listeners and haters alike, but of its sheer ubiquity: there’s so much rap music out there we don’t know what to do with all of it. Between label heads, rap blogs, mixtape dump sites, and the like, any hopes of comprehensively covering even a fraction of it all is a pipe dream. The naysaying perspective is that it’s easy to produce new music and thus the bloat of rap can be attributed to a lot of untalented artists who don’t necessitate critical consideration, which is true to a point; the more tenable is that ease of production lets good artists create truckloads of material in little time, leading to a loop of regurgitating tastemakers that prevent a lot of other similarly talented artists from being heard. So where it takes an artist like Destroyer sixteen years to release nine albums and three EPs, guys like Curren$y and Lil Wayne and crews Green Ova (and soon the A$AP Mob as well) can eclipse that amount of material in a year or two.

As our model of the theory on rap’s bottomless pit of substantive contributors, Kream is about as unsung an artist as you can find. Any combination of Google searches for reviews of or reactions to this mixtape turns up little to nothing. If Last.fm’s charts are to be believed (obviously they’re not), I might be the only person to have listened to this. DatPiff offers the most info, but at the same time is the only place providing anything useful about this tape. Even at that, though, the results are pretty underwhelming: 21,000 views, 9,000 streams, 3,000 downloads. For perspective, in about the same amount of time A$AP Rocky has charted 336K/173K/159K for LIVELOVEA$AP (2011), while Rick Ross has surpassed half a million in each category since the release of Rich Forever on January 6.

At the same time, the qualitative drop off from either of those two tapes to SD&LN is not as far as it would appear, and certainly not as Grand Canyon-esque as their relative popularity might suggest. Kream isn’t quite flawless as a lyricist, but he’s good enough that it’s more of a fly in the ointment when a poor or bland metaphor eventually rears its head rather than the harem of gnats that the wordplay of some of his peers can seem: small, annoying, monochromatic, directionless. The disappointment with a bleh closing line like “I’m goin’ in, I’m goin’ in / Penetration, ya dig?” on “Go Hard,” for example, is not so much about the line by itself, but that it manages to undermine the rest of his two fantastic, endlessly quotable verses: “I go hard or home and I’m never at the crib / Your girl call me ‘daddy’ but I’m never with your kids”; “I’m making all this money and these haters wonder why / I’m taking all the honeys, I’m a different kind of fly”; etc. Or when he drops the line so nice he used it twice, closing the first verse of “We On” and then opening the next track “Germany” with, “You think you know me you don’t even know my last name / I paint a perfect picture, nigga, with a glass frame,” it’s less the line itself than how distractingly apparent it is, how it sullies the stanzas he surrounds each instance of it with.

Thankfully, his few amateurish or boneheaded mistakes often get brushed under the rug by the surprisingly fantastic production that accompanies him throughout this album. Taken from a mixed bag of producers, the tone of the mixtape curbs toward the murky, lean-sipping moods of southern hip-hop, its snap and pop alongside bombastic instrumentation giving Kream a suitable pairing. The best example is “I Doo It,” the echoing bass tones coalescing with a skittish cache of clicking percussion, leaving Kream and guest Bia to go as hard as their hearts’ desire. “High (Intro)” proves the beat and Kream’s sing-rap flow to be perfect counterparts, the swooning vocal sample allowing Kream to show off pipes that aren’t quite impressive but are still functional. And “Everything New” is stunningly similar to Rocky’s “Brand New Guy,” both hard-edged numbers about having new shit, both featuring a scene-stealing up-and-comer guest spot, and both being the cream (heh) of their respective mixtapes.

And though that similarity is more likely an absurd coincidence—Rocky’s tape came out a mere month before Kream’s, hardly enough time to replicate a song in that fashion—it still points out Kream’s weakness in personality, his lack of idiosyncratic identifiers, at points making this sound more like an homage—starting with his copping of Wiz Khalifa’s giggle—than an attempt at artistic pioneering. Still, though, the artists he apes are artists we nevertheless love, and as far as debut mixtapes go one can do worse than mimic some of the most critically acclaimed, fast rising auteurs in the rap game. Perhaps Kream will stick out his neck a little more and offer something more specifically Kream-centric on mixtape #2 (or, if he’s lucky enough, album #1), but for now this is hardly anything to scoff at.