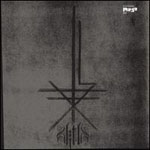 Thank heavens Peter Rehberg has brought Mego back, and that the very first thing Editions Mego has done is set about reissuing seminal ambient noise albums like Fennesz’s Endless Summer (2001) and the almost impossible to find Kevin Drumm album Sheer Hellish Miasma (2002). And it’s easy to set the KTL project in that Mego tradition: high end, high concept noise and some of the most ubiquitous albums of the millennium.

Then again, you may also have to set this in the tradition of black metal. KTL is glitch sculptor Rehberg’s collaboration with Sunn O)))’s Stephen O’Malley—from the sounds of things, it was fallen into more than planned—and the results are…depressing? Brutal? Beautiful? Creepy? Fans of either musician might guess what to expect here (although fans of O’Malley might be more receptive); believe me, despite liner information that suggests some of these tracks were recorded in a sunny garden, sunshine ain’t part of it. There are six tracks, but there are really just three songs: “Estranged,” the quiet intro, “Forest Floor,” the caustic middle, and “Snow,” the dappling outro. It’s like an atom bomb sandwiched between two slices of air.

The tracks don’t necessarily move forward so much as find a whirlpool and swirl, unspinning waves of brittle noise and sub-frequency drones. Opener “Estranged” is almost twenty-five minutes of rustic mutilation; various objects seep into the opening organ drone that sets off the album: filtered washes of cranky synth, soft breathy notes that compound the opening chord, creaking door hinges, and O’Malley’s severely resonant and painfully slow guitar riffs. The song is a testament to the limits of this kind of music—exactly how long can you expect an audience to stay with this scattered noise? I tend to look favorably on the track in the sense that when O’Malley does finally let loose (I mean, as loose as O’Malley ever gets, which means crunch tone and feedback and maybe a slightly larger pick) Rehberg subtly changes the tone of the backing wash and the track suddenly picks up momentum out of the exact same qualities that kept it going in circles.

The “Forest Floor” suite comes closer to the kind of distorted experimentation I expect most fans are looking for. We get that quivering distortion as a backdrop that sounds like buzzing zombie bees, or every millisecond set on hyperflange, but also the tone keeps wavering in pitch, making it impossible to dig into the chords with any real foothold. Below, spastic bass dives are paired with enveloping feedback drones; here is where the real rhythm exists, pushing the track along whatever happens topside. And above, flashes of sonic spray suffocating under grain delays—that substitute as percussion—and random bursts of high-pitched guitar noise. And then the whole thing stutters into some stunning feedback manipulation from O’Malley, before Rehberg returns with his thrumming backdrop. The qualities repeat for each section; it’s the backdrop that changes. The second part opens with screeching feedback compressed into an almost-riff under which O’Malley launches hilariously chunky chords. It’s like a foley artist with a penchant for necromancy doing a train noise. This combination underpins the remainder of the track; Rehberg again modifies the tone with slight adjustments to some organ chords and other barely audible noise that looms in the background. The third is all straightforward anger; sludgy distortion that erupts into feedback and weird little tangents that almost sound like a gate effect about to create some form of beat. Part four begins like a sped-up sample from an old horror movie; O’Malley runs through chords on his guitar while Rehberg slowly folds noise samples on top, again vaguely suggesting percussion but mostly just building the tension of O’Malley’s already blistering fretwork.

“Snow” follows from “Forest Floor” with some really neat interplay between the two musicians, and there is enough of a sense of forward momentum in this sparse section of the track to make it stand out from the rest of the album. O’Malley creates percussive effects on his guitar while a whingy whistling synth noise adds color in the background. It sounds like phrase samplers are being employed to great effect; O’Malley slowly winds new guitar noises around the old ones and Rehberg opens the filters up on the white noise in the back. For something that is essentially an anti-climax to “Forest Floor,” it’s amazing how engaging this piece is.

KTL is pretty uncompromising, so if you don’t like this kind of grating music, this probably isn’t going to change your mind. On the other hand, beautiful moments like “Forest Floor 2,” “3,” and “Snow” show just how gorgeous a more formal collaboration between these two musicians could be. When “Snow” peters off into oblivion, I don’t care how punishing the music is—I want to hear way more.