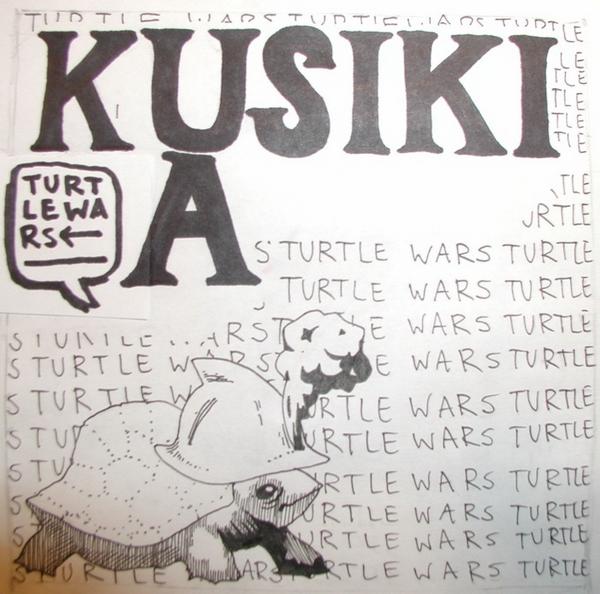 In the East African language of KiSwahili, kusikia means both to hear and to feel. Clearly, this Portland-based duo of guitar and drums understands that sound is a vibration and music a nutrient, coursing through you, injecting energy into your body. In the case of Turtle Wars, though, music sometimes feels more like the fever cycles of malaria, with unrestrained outbursts taking hold of lilting refrains.

Kusikia has the angular edge of Slint and the languid attitude of Delta blues, cultivating a live sound in which things like loop pedals are conspicuously absent. But really there is no saying exactly where this band is coming from, although one might presume that it’s a despairing realm. Then again, right before guitarist Nsayi Matingou throws down the deep and swaying theme of “D,” she lets out a happy giggle. Like “D,” tracks “Danger” and “Trouble” follow a similar improvisation-friendly structure—and they are just as foreboding: Matingou puts down a heady guitar line, singing in rich murmurs over Peter Ryan’s intricate drums as the tension builds; finally it erupts into malarial tremors of gnarled riffs and skittering crashes, only to return ever more gently to the original motif. The driving beat and cutting chords that open “Heart,” and the propulsive three-chord bass and hoe-down beat to follow, offer an invigorating change of pace. “Rumbly” forms the album’s fever pitch, beginning with a crushing blast that segues into a strained, stabbing motif. As Ryan clobbers his toms and cymbals, Matingou repeats creepily, “I just wanna be friends.” The mood lifts at the end of closer “War,” when Matingou breaks into laughter. Ryan, with his wacky shrieking, seems to indicate that the fever has passed.

Yet it’s not finished. Kusikia has been tearing across the northwest and, in due course, their bruising but brittle sound is sure to materialize in recorded form again—indeed, like most strains of a defeated malarial fever. Unlike such a scourge, however, many listeners will be more than happy to welcome Kusikia’s heavy doses of catharsis into their body.