1. Grab (And Its Lost Legacies)
2. Empty Gazing
3. Last Minute Jest
4. The Second Ponderosa
5. Bonaventure’s Finest Hour
6. Sets of Four (Its Meaning Is Deeper Than Its Title Implies)
7. The Nightjar 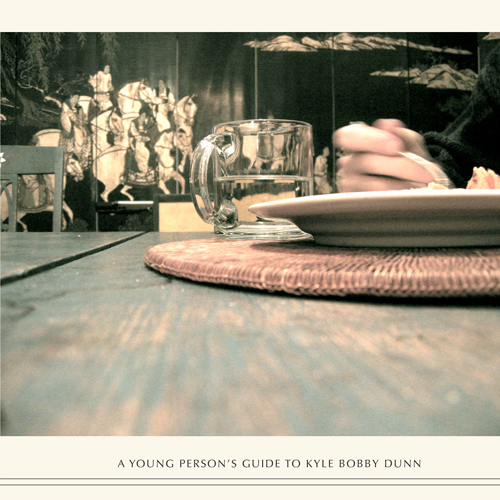 All the patient people know that Ocean Songs (1998) by the Dirty Three is the best album to take on voyages—seaborne, riverborne, and fucking big lakeborne. If you’re stuck in a coracle in a huge expanse of water with only a guitar, a drum, and a violin to survive on, you won’t want to hear anything else, right? So how would you feel about a spiritual successor? One of ambient New York’s busiest meditators, Kyle Bobby Dunn’s been in the lotus position for five years plus now, taking only minimal breaks for crackers, Facebook, and bill payments. Wherever his songwriting takes him has obviously allowed him to accumulate some serious air miles too, and it’s these recollections of altitude and semiconsciousness that feed this odd kind-of Best Of, where assorted cuts from his career to date combine like flavors of cabin oxygen. Ambitious even for a double album (and at two hours, a record not to time your jog to unless you’re breaking in eight years of trainers), Dunn hopes to make his own style of landmark voyage-friendly album: one which offers a kind of cloudy, heady sojourn the Dirty Three can’t do with waves.

If you want the cue card version of A Young Person’s Guide to Kyle Bobby Dunn, think helium for the iPod but slow to take flight. Opening with “Butel,” a drone that’s precisely three notes higher than the one your computer fan makes, Dunn doesn’t waste any time in setting out the first of his sunrises—instead, he only takes eighteen minutes. In terms of surprises, that’s pretty much the standard: the live action daybreak of “There Is No End To Your Beauty” is somewhere between heaven and the stratosphere, and the mournful ascent of “The Tributary (For Voices Lost)” heard early on March 1st seemed oddly appropriate for the day all the PlayStations died. Dunn’s obviously spent some major time climbing those dizzying Tomb Raider ladders, the ones that caused the game to wobble while the minimal score soldiered on.

A little trickling and some baby frog effects aside, that’s the first disc put to bed. But by now the listener should be at peace, or at least stretched out on the couch and whispering about father figures. The second disc doesn’t want to warp such a calm and hypnotic formula, though it does allow some more assortment to creep into the steady proceedings. “Grab (And Its Lost Legacies)” is like wading into a bank of empowering pink mist where Dunn’s skillful manipulation of one blissful chord floats up the spine as enchantingly as codeine (that also takes eleven minutes to work).

It’s not until you reach “Last Minute Jest” that a bigger break in the tone can be sensed, and a lightly played piano creates Big Ben chimes as heard by Salvador Dali. Some floppy numbers come loose and then AYPGTKBD begins to really branch, first with the ecstasy of “The Second Ponderosa” and then on “Sets of Four,” where everything gets dangerously close to rhythmic. Dunn’s light rumble turns out to in fact be a kind of white ebb, where the tide pulls away only to advance in distances upward of a millimeter. The effect—and I’m guessing this is the intention—is similar to watching the sea from the window of a gently undulating aircraft; Kyle Bobby D knows when you’re over that much water you only want to undulate so much.