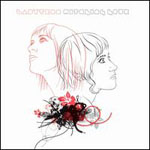 Is it proper to state that you’ve underestimated a band that you never paid much attention to in the first place? Up until Witching Hour, I had always assumed that Ladytron were the epitome of a singles act; effortlessly grinding out electro pop hits for indie dance night, but not exactly capable of sustaining such momentum over the course of a long player. If nothing else, at least they were a hell of singles band. I’ve never had any previous desire to purchase either of the first two Ladytron records, but can accurately pinpoint where I was the first time I heard “Playgirl” (Don Hill’s in New York City if you’re wondering).

But now I’m thinking that this band may have had me fooled because Witching Hour is a "singles album" in the same sense that Parklife or Different Class were. The commercial cuts remain utterly fantastic, but they’re hardly the only reason to tune in. That said, you would be forgiven for playing “Destroy Everything You Touch” and “Sugar” to the point of forgetting that there’s actually eleven other tracks on the album. The former completely deserves to be the electro-goth dance smash of 2005. It’s an urgent, chrome-plated groove that I’m unable to listen to without imagining myself as a futuristic spy in an Aeon Flux environment (do I hear a movie soundtrack?). While “Destroy” does indeed have all of the trappings that one has come to associate with Ladytron, namely Helena Marnie’s hypnotic lead vocals and an insistent, keyboard driven rhythm, the band steps up their game with new found production values to create an air of claustrophobia unlike anything in their earlier efforts. And while the fuzz-guitar laden “Sugar” isn’t quite as epic, it still comes off as the greatest unreleased Elastica song imaginable; what we all anticipated The Menace would sound like before facing the harsh realization that it sucked.

The aforementioned singles remain Witching Hour’s two strongest songs, but it’s to Ladyton’s credit that Hour actually sounds like a genuine attempt at constructing an album. Nearly every track is united by a dense gloom that lends the album a degree of urgency, and skittering tracks such as “International Dateline” and “Highrise” would be unsettling listens were they not so damn catchy. The cloud cover subsides somewhat after the Bulgarian-sung, Reznor-ish rush of “Fighting in Built Up Areas,” and Witching Hour’s latter half concludes with the cautious optimism of “WhiteLightGenerator” and “All The Way,” two tracks which owe far more to mid-'90s shoegaze than the second rate electroclash acts that Ladytron get lazily lumped in with.

Witching Hour could stand to be about two tracks shorter, but its quality comes as an unexpected, and highly welcome, surprise. Ladytron still have an incredible knack for single craft, but Witching Hour is the antithesis of a filler album around which “Destroy Everything You Touch” and “Sugar” revolve. Seriously, it’s the last record I expected to enjoy all year, and more than makes up for Ladyton’s unconscionably awful contribution to that Bloc Party remix album.