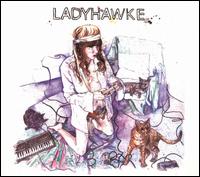 Ladyhawke is the nom de rock of Pip Brown, a 28-year-old one-woman band and native New Zealander who took her stage name from an obscure Matthew Broderick movie from 1985. She draws almost exclusively from that era in crafting her synth-heavy pop music—and I excuse you from rolling your eyes right about now. Neither the pages of CMG nor the blogosphere have lacked for covering—I mean really covering—all breeds of current musicians busting out all manner of cheesy keyboards and electronic beats in the name of capturing some of that me-decade magic, a conceit that’s starting to ring hollow even when the bands in question happen to do this extremely well (e.g. Cut Copy).

But Brown deserves more than a shoulder shrug. Even a cursory listen to Ladyhawke makes it obvious she’s aping the ’80s from a slightly skewed angle. Aside from opener “Magic,” which blatantly leans on New Order’s “True Faith” (though big ups to Brown for ripping a NO single that never actually appeared on a proper album), Ladyhawke exhibits minimal interest in the Cure, Echo and the Bunnymen, or even the Erasure/Pet Shop Boys-type disco fops that Franz Ferdinand seem so enamored with on their latest album. Instead, Ladyhawke traffics in uber-mainstream retro radio pop and her self-titled debut ends up comprising some sort of lost (re: embarrassing) soundtrack to just about any ’80s teen movie you can name. Far more Roxette than Robert Smith, the result is un-ironic version after version of the hysterical songs that Craig Wedren composed for Wet Hot American Summer (2001), the 1980s summer camp send-up starring the crew from The State.

Pip Brown seems to have more than a passing familiarity with the highlights of the Savage Steve Holland oeuvre. I can’t listen to “Crazy World” without envisioning John Cusack’s Lane Meyer saving his reputation by navigating the K-12 on one ski, and peppy numbers like “My Delirium” or “Back of the Van” sound custom-made for the three-minute montages so popular in ’80s (re: all my favorite) cinema, especially the boat-building exercise in One Crazy Summer (1986). Likewise, “Morning Dreams” is the ultimate John Hughes closing credits soft ballad (“Morning dreams come true / ‘Cause I wake up next to you”—awww) and it also sounds a ton like T’Pau’s 1987 big hair smash “Heart and Soul” (as in “Give a little bit of!!!”). Some of the songs even feature wheezy Yamaha DX-7 intros that once led this critic to believe that the shuffle on his iPod was gifting him with Van Halen’s “I’ll Wait” until pounding electronic drums and clean guitar strumming announced otherwise.

Substantive lyrics aren’t part of Pip Brown’s forte but, then again, they’re totally unnecessary in the genre to which she peddles. The choruses, though, most certainly do matter, and the majority are catchy and Mountain Dew-awesome, Brown’s clichéd tendency to repeat key lines ad infinitum (e.g. “Back of the Van”’s “You set me on, you set me on, you set me on—FIRE!”) made excusable by the instant gratification this type of pop music demands. The production is also top notch, the vocals properly forthright in the mix and all sonics crystal clear. So it follows, unsurprisingly, that Ladyhawke offers little in terms or depth or dynamics, not so much a proper album as an imagined pubescent soundtrack compilation with every tune existing simply as all energy all the time. Nobody should be expecting a full course meal here: this is best approached like a bag of Sour Patch Kids—impossible to live on due to an overwhelming sugar content but utterly addictive in proper doses.