Other Records by Lali Puna 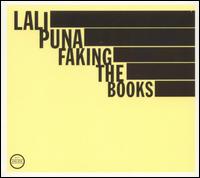 If I had my way, if there were any justice in the world, my review of this album would require only five words: Faking the Books is good. But, these days, brevity is not the soul of wit. And, bafflingly, people have grown to expect real assessment and analysis from music reviews. So here goes… Faking the Books is good. Only good. Lali Puna break no sound-barriers here. They’ve produced beautiful, consistent, accessible glitch-pop. They’ve produced the kind of music you’re guaranteed to enjoy and probably forget but ten minutes later.

Two qualities make this music forgettable: simplicity and uniformity. Every song consists of a few elements, introduced atop one another in the same manner every time. Usually they drop the droning synth notes, then the whispered vocals, and then the throbbing bass. The beats get more glitchy, then less glitchy, the more glitchy again. For the best example of this song structure, check out the title track, which opens the record. Also, most of the songs are riff-driven, rather than melody driven. In nearly every song, Lali Puna creates texture and momentum by layering an alto riff over a bass riff, which can be interesting at times.

However, though this composition strategy induces some head-bobbing while you’re listening, you can’t take anything away to hum. There’re no hooks to get stuck in your head and no melodies with which to sing along. Not surprisingly, then, my two favorite songs from the album are the two songs that break from the strategy: “Rapariga da Banheria” and “Call 1-800-FEAR.” “Rapariga da Banheria,” the album’s goofy track, is carried entirely by its bouncy bass-line. “Call 1-800-FEAR” wins me over with its different structure – bursts of sound in the first half and near-ambience toward the end.

I really don’t want to present an entirely negative-sounding review of this album, because Faking the Books is good. But really, if you were to buy this album, you wouldn’t regret anything, because Lali Puna don’t dare take risks with their sound. Working within the collective of glitch-pop veterans from Weilheim, Germany (the collective that produced the Notwist and Ms. John Soda), these guys have the glitch-pop thing thoroughly figured out. They make no serious efforts to develop the genre; they work within the existing glitch-pop frameworks to create pretty music. Ironically, throughout Faking the Books, Lali Puna plays by the books the entire time.