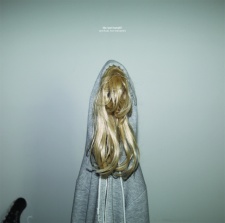 I love a kind of zany. Not the Fraggle Rock kind, although that’s cool too, but the kind the Last Hurrah!! attempt, which is like the hint of refreshment orange zest will give a good stew. Because I especially love a band taking a self-serious style of music (in this case, drone pop) and camping it up. You can tell this band is trying to be funny because of the way Heidi Goodbye articulates her vocals, elongating every vowel like she’s explaining poetry to children. She’s Jenny Schecter, basically, that time she was trying to film a sex scene and berated one actor for groping at another’s crotch like she was “sewing up a hole in her jeans” instead of fucking. The basic idea is serious, but the Amanda Woodward huffing sarcasm of it all elevates the entire affair into the stratosphere: it’s like, “here’s a thirty-plus minute song suite called ‘The Ballad of Billy and Lilly’ and I am going to tell you about Billy and Lilly over and over and over until you fucking well get it.” Which: suite. It’s that kind of pun, I mean, but opened up and operated on and every seam and bit of scar tissue is smiling at you with a huge grin.

The other way you can tell the band is trying to be funny is that composer HP Gundersen was listening to “Suite: Judy Blue Eyes” (1969) one day and thought, “what 2011 needs is an even longer version of that track.” Which is like that time that that actor who couldn’t fuck the other actor with any more gusto than she would “moving furniture” asked Jenny Schecter if Jenny wanted to see her hand. ‘Cause this track is the hidden hand made visible; the source material is just Silly Putty Gunderson sculpts into twenty marginally different shapes; there are fingerprints everywhere, I mean, and sewn seams are loose and effortless, like the thing we didn’t realize—like, none of us—is that “Suite: Judy Blue Eyes” has always been the blueprint for modern music, and what the fuck has everybody been doing all of these years? Is your latest single 30 minutes long? Where’s your mustache? It’s getting to the point where music is just no fun anymore. Or even: how can you catch the sparrow? (Of course, what would have been really funny would have been to call up Graham Nash and David Crosby to sing backup since, y’know, the last thing I saw them doing was singing backup for Jimmy Fallon so why not?)

Ahem: it’s a problem, slightly. If a thirty minute song suite about Billy and Lilly called “The Ballad of Billy and Lilly” isn’t precious enough, the parts of the suite aren’t really connected like they are in “Suite: Judy Blue Eyes” or, say, Genesis’s “Supper’s Ready” (1972); nor do they just compose a jam like, I dunno, lots of shit, but let’s say “Dark Star” from Live/Dead (1969) just for fun. Or, closer to form, think those longer tracks from Alexander Tucker. So it’s a long track where the segues between sections are rickety at best, and it makes me wish for track breaks, I guess, especially when Gunderson keeps interrupting the suite with a fade in of the intro track (“Mother Nature”), and also when the songs are linked with abrupt crossfades, and also when several sections are themselves too long to allow the whole thing to gel (like, say, the Iron & Wine-esque guitar jam in the middle), and also anyways there’s this push/pull thing Gunderson can’t quite navigate between Crosby Stills Nash (CSN)-style chord progressions, letting Stephen Still’s open tuning drone out, and aping the Who’s gleeful chanting of “cello cello cello” on “A Quick One While He’s Away” (1966) with “Lilly Lilly Lilly” at the end (this year’s model of “doo doo doo doo doo de doo doo doo doo doo”). It’s a bit much without a strong through line—it’s like somebody tried to chalk it with a plumb-line, but most of it got erased. Or, cynically, somebody just thought it would be cool to not bother with track breaks because it was more “artistic” or something. (It wasn’t.)

On the other hand, you get these gorgeous little slices of songcraft that read more like Roy Harper than CSN (for example, the stuff about Lilly that starts at about the nineteen minute mark). In fact, the one thing that does a lot to tie these short ideas together is that they’re all quite good. And so there are moments of pleasure and moments of brilliance throughout where Gunderson focuses on composition more than the sound, and the Fanta Cream Soda rush of the concluding track is acceptable precisely because it reorganizes what had been to that point disorganized at the end. Which, in short: I wish this album was more of an album and less of a sketch book, I guess, because the elements are all here for something awesome but the execution is…distracting. It’s more CSN than drone and more song sketches than song suite, and the simplistic but simplistically gratifying choral outro of “Suite: Judy Blue Eyes” is never really matched, but: I love Roy Harper too. Maybe the Last Hurrah!! should have figured out his secret tuning (hint: it was writing fully composed songs). And so while it’s Jenny Schecter zany in delivery (impulsive, but with a point), the execution is just kind of Fraggle Rock zany, like if Gobo wrote a bunch of ditties based on little ideas he found littered all over Marjory the Trash Heap’s body (…just impulsive). It’s a bunch of tangents, I mean, which is weird since HP Gunderson is a producer for less tangential artists. I dunno—maybe his personal squad of Doozers were out on break?