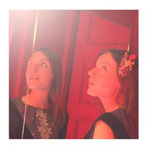 Lau Nau’s sophomore effort is paradoxical: a series of drawn out emotions as repetitious photo essay, but as each photo focuses it soon after dissolves, reappearing once again, free from scrutiny, at the peripherals of the already pointillist story. In so many words, its beauty is frequently apparent but its motives and meanings elusive—skittish, too, refusing to connote one thing at a time. Its prettiness is unnerving; its surreality feels oddly tactile; its angst feels resigned; the whole record sounds gently but powerfully in flux.

Due, in principle, to Lau Nau’s chameleonic vocals. “Rubiinilasia” exemplifies this: church bells recede to reveal a slight organ over which Lau Nau-as-specter wearily hovers, her tone almost a taunt, disquieting and low. The effect is something like clattering paper clips inside a snow globe as frigid air rushes through the weather inside, fake hope leaving the fake town as quickly as sparks. Midway through, though, she shifts tenor, letting her croon soar into boundless echo, and the organ that served as haunting ambience becomes a galvanizing breeze. There’s even a whiff of exhilaration before the track falls on a bed of perpetually reconfiguring black fuzz. It all plays out like a perception of death, at once terrifying and bleak and maybe childish, but over time, fear subsides, leading to an inevitable acceptance of mortality. Lau Nau’s voice is an amazingly malleable instrument; as she moves up a few octaves and leavens her inflection, she creates a hopefulness that paints the distortion as a warm shroud rather than an austere fate. Her comfort, then, is how readily she can use that instrument to transform, even capture, her surroundings; our comfort is the fascination inherent in watching such a seamless act.

In fact, Nukkuu, in its own quiet way, bursts with fascinating uses of sound, and that uniqueness works wonders in augmenting its emotional weight; this stuff would be gripping your mind were it not so busy breaking your heart. “Maapahkinapuu” rises and falls as subtly as slumberous breathing patterns, Lau Nau’s soothing siren song and ambient stardust permeating the track, which periodically hiccups before returning to its soft inertness. “Mooste” is a skittering music box, juxtaposing comforting lullabies with frantic clicking, which sounds like someone attempting in vain to spark a lighter in a brisk wind, and as that struggle subsides, oscillating coos under ear-splitting clanging, the whole becomes increasingly muted and melodic while negative space begins to subsume the track.

These sounds don’t come together to create lush soundscapes so much as sit there like scattered puzzle pieces. They are as fractured as the emotions they seem to convey, their assemblage set in motion by Lau Nau’s equally fractured voice. A falling leaf with no ground beneath, she never reaches full-throated catharsis nor a resolute somberness—just as her compositions never really swell. And yet her music’s pathos still finds its own way to dizzying heights. “Vuoren laelle” commences with warm humming and ascending pianos before Lau Nau steps forward to deliver the sweetest of hymns, caressing each syllable before moving on to the next, setting up bittersweetness and playing with how to soothe it. Then she falls back into that complacent hum, aloof as ever, and we’re left to gawk as the album fades to a close. The ache is gorgeous but still an ache: Lau Nau would rather not dwell, preferring to provide us with glimpses instead of all-out exposure, instead of that solid and permanent photograph of something that a photograph could never really capture, anyways.

Such restraint, I think, renders all of this so poignant. Nukkuu is comely in its meekness, expressing not only the peaks and valleys of, get this, existence, but the spans of those extremes, articulating the fleeting nature of our experiences through its slight, perpetual motion. Life moves pretty fast and in incomprehensible directions, but none too suddenly, and, mirroring that, Lau Nau’s compositions are amorphous, changing, seemingly innocuous, in the way we ourselves do over time. Nukkuu doesn’t confront us with these revelations so much as imply them, ladling out as palpably as possible the ineffable qualities of living, breathing, beautiful potentiality, crying while you’re eating pancakes, the whole shebang. It’s a gargantuan concept to tackle, and perhaps Lau Nau succeeds because she doesn’t try to wrap it in her meager wingspan, but chooses instead to gesture discreetly towards it as, of course, she gestures towards so many other disparate places.

Linking a work so thoroughly equivocal to such heavy themes may seem silly, but this mound of cosmic garbage makes such implicit sense. It’s as if reality and every possible reality were imagined to be a ball of yarn in the sky, intertwined but poised to be unraveled, and then Lau Nau relents because, shit, that would take forever—and yeah: stonerisms, I know. But Nukkuu is pliable enough to accommodate the most frequently conflicting interpretations, simultaneously, and something this mired in fog is probably best internalized at the most personal of levels anyway. It is, in short, magic. Even now my toes are tingling.

Still, poignancy and vividness are conveyed in strange ways throughout this soup. Like on “Lue Kartalta,” strings pop and whirr with no discernible pattern, then Lau Nau enters and it all clicks: she plays with the discordance, cajoling it into a fitting duet partner for her deliberate lullaby. We finally get a glimpse into what all of this means—here, specifically, somber hopefulness, but moments like this crop up throughout and disperse just as quickly, adding a vivaciousness to all the cosmic, ponderous murk I’ve probably draped unattractively around the album by now. Vivacious on their own merits, the songs beg for personification if only to sit at the edges of consciousness (big reveal: Nukkuu is Finnish for “sleep”), staring, evading attempts at understanding them much beyond the lesser extent to which we understand the pulse of our own emotions. And no shit, that’s what they want us to think, that delineating this album’s cryptic contours is roughly as difficult and as scary as tracing the folds of the human mind. It doesn’t work that well because that sort of brain-numbing breadth combined with the raw beauty at hand make for a transcendent listening experience somewhere between religious awakening and good weed music. Hallelujah. And, no, that’s not Finnish.