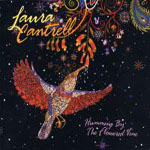 Humming by the Flowered Vine

I didn’t love Humming by the Flowered Vine the first time I listened to it. I was startled by a few of its arrangements, which seemed, especially because the record was produced by J.D. Foster (responsible for Richard Buckner’s exceptional and spare Devotion and Doubt), a bit overblown and awkward. The instrumentation on a few songs -- the smoldering guitars on “Letters”, the as-sunkissed-as-Nana-Mouskouri fingerpicking on “California Rose” -- turned me off. But what can I say? By the fourth time through, it started to creep up on me; I was out for a walk myself when I listened to Cantrell sing, “I went for a walk in my old downtown.” The dislocation and sadness she expressed about going back to a place that’s no longer home rang through me. I listened to it again.

Laura Cantrell grew up in Nashville, which comes as no surprise when you listen to her music. The parts of her bio that do seem a bit out of place are that she’s lived in New York since the mid-eighties, that up until recently, she supported her music career by working as the Vice President of Equity Research for The Bank of America, and that her first two records (2000’s Not The Tremblin’ Kind and 2002’s When The Roses Bloom Again) were put out on a Scottish label (Spit and Polish). Spit and Polish may be a relatively obscure label, but if their location in the U.K. had a hand in Cantrell’s music reaching the ears of BBC’s John Peel, her relationship with them has been nothing but blessed. In 2001 Peel called Not The Tremblin’ Kind “My favourite record of the last ten years and possibly my life.” These words helped kick-start Cantrell’s career and propel her toward other artists who have been equally receptive. Among others, Cantrell has toured over the past few years with Elvis Costello and Lucinda Williams.

As were her previous albums, “Humming by the Flowered Vine” is a mixture of covers and originals. It opens with Emily Spray’s “14th Street”, a song about an imaginary encounter on New York’s (you guessed it) 14th Street that Cantrell says “perfectly sums up the moment when you see someone you’re obsessed with on the street and decide whether it’s worth it to say hello or stay safely in the background.” It’s flirtatious and fun and doesn’t make me want to cry at all. “Wishful Thinking,” written by California country legend Wynn Stewart, is toe-tapping country with a rollicking piano bassline and some great fiddling by Kenny Kosek. “Letters” is a previously unreleased Lucinda Williams song that, in spite of its initially unfriendly guitars, proves itself to be one of the album’s highlights.

The true highlight for me, however, is “Bees.” It was written for one of Cantrell’s friends as he approached the end of his life who she says “was growing to accept that he wouldn’t be around forever […] but was sadly aware that the people that he ran around with for years were all gone.” The arrangement is appropriately spare and Cantrell’s voice is forlorn and unfaltering. It reaches a spellblinding climax with, “No voice to say goodbye / tears on my face have dried / I’ll be coming through / on that wavelength a heart can tune.”

What is it about Cantrell’s voice that makes it so singular? Is it a little sharp? A little flat? Is it that charming, Dylan-esque knack she has for drawing an extra syllable out of a word like par-ti-ci-pay-eet? It’s so frank. It looks you straight in the ear and, very sweetly, asks you to listen. It’s a voice that can do bright and cheerful almost as well as sad – it seems to have nothing to hide.

In a way, it’s surprised me that Cantrell, who sings straightforward, no-frills country, has garnered praise from so many disparate sources. It’s easy to see why, say, Lucinda Williams is a fan, but who would have expected the indie record label Matador to take an interest? I think I may have figured it out: Laura Cantrell strikes a chord. She makes what many of us search for and so rarely find--music this honest, this unpretentious, this good.