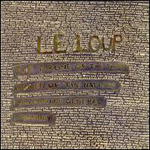 The Throne of the Third Heaven of the Nations' Millenium Assembly

Open up the lyric sheet! Marvel at the drawing of the wolf, that magnificent beast! Look at the howling animal! Look! To the West! To the stars! Now look at a book! Brush up on your Dante! Now look back at the wolf! The wolf! (Are you still looking at the wolf?) Stop! Now look at the stars! You are a star! And a God! And a wolf! Look at this paragraph! Exclaim! Look at all these fucking exclamation points everywhere! Rejoice! Now repent! And in your repentance ask a God (for you are also one!) why oh why this album, which seems on the surface so filled with joy and mysticism and exclamation (four such marks just in the track listing!) ultimately leaves you with only this: what?

Le Loup is a killer band. Their live show, which I stumbled across a few weekends ago at the Pygmalion Music Festival, was -- to use their own heavy-handed language -- a revelation. Brimming with excitement, the seven of them bounced around stage, played a bunch of instruments, and in the process reminded me of some of my favorite live bands, like Architecture in Helsinki, Grizzly Bear, and even Modest Mouse (maybe it was the banjo). In the next set of the night, a member of Chicago's Bound Stems called their performance "inspiring." I couldn't agree more. I left smiling with a copy of The Throne in my hand, prepared, at minimum, to be in love with the album. I was, in short, all, "!!!!"

So it wasn't much of a surprise, then, to learn that the bloggers were all abuzz as well, especially over the song which shares the band's name, "Le Loup (Fear Not)." It's a solid track, with haunting vocals and a nice banjo line and a delicate folk sound that defines indie good taste. But where was all the "!!!" that my concert experience suggested, that the liner notes represented, that the bloggers promised? This was a pleasant enough song, but it lacked the spirit that coursed through my veins that night at the show. I furiously went back and listened to the album, again and again, searching. I didn't find it, whatever the fuck it was I was listening for, and I was totally and seriously bummed.

I'm aware of how unfair this is. Live show excitement (plus a few drinks), blogger hype: who gives a shit? And who am I to demand more "excitement" from an artist who essentially opens his album with the repeated phrase "O this world was made for ending!" But within that sentence actually lies most of the problem with Throne. The first is that this is the work of an artist, in the singular. Assembled in a bedroom, this album is the brainchild of the extremely big-brained Sam Simkoff, who played every instrument and sang almost every note. Simkoff is seriously talented, and while the album is uneven, he proves that he can handle the banjo and drum programmer with considerable skill. Unfortunately, he can't single-handedly convey the energy and bombast of six other bodies; again, I know this might be an unfair criticism, but I was let down.

Secondly, the album is seriously, needlessly, and overbearingly pretentious. This is an album that is thematically filled with mysticism and spirituality, devils and angels, and the end of the world. These are all fine things to make a record about. But if you take the extended album title, from the artwork of the same name by James Hampton, add in the "Canto" Dante references, and sprinkle on some of the melancholy (and melodrama) of many of the songs, and you've got Simkoff's recipe for the album as Big Artistic Statement. (The last track is especially self-indulgent.) All of which is a fine pose, I suppose, but ultimately calls into question one of the album's strengths: its emotional urgency. Is everything here aestheticized?

Yes and no. Even the elements come under Simkoff's artistic control, like the instrumental "(Storm)," where a thunder storm sound effect gets, uh, screwed and chopped. But emotion and urgency do often manage to shine through the glitches and intellectual fireworks. "Planes Like Vultures" opens with a chorus of vocoded voices that recalls Imogen Heap's "Hide and Seek" which soon clear out to make room for the high-hat and piano line that accompany the endlessly repeating "O this world was made for ending!" It's a rather straightforward "build-up" song, but it works well, and segues nicely into the next track.

"We Are Gods! We Are Wolves!" is the album standout, and shows what Simkoff is capable of when not doing the more traditional folk instrumentation exemplified by "Le Loup (Fear Not)." That song, as I've said, is fine, but "We Are Wolves!" is a more fully imagined pop song, complete with handclaps and an 8-bit synth line. When he does stick to more acoustic arrangements, though, his songs are still extremely listenable and even inventive. The very next track, "Breathing Rapture," uses multiple vocal tracks and the best lyrics on the album ("Love is shaped like cities burning / Sifting through the ashes after / We will find your life in laughter / O the black and breathing rapture") to create a really standout folk song.

These two songs also exemplify the fact that the album, for all of its aspirations to be "a statement," actually feels pulled in separate directions. On one hand, contemporary folk and traditional Americana seem to be the foundation, but Simkoff is clearly also drawn to dreamscape synths, angelic vocoders, and digital rhythms. While occasionally these are united in interesting ways (the last "Canto" is awesome), the album feels split in two. I guess what I'm looking forward to is an album that is split by more than two, that is endlessly divisible rather than being didactic, endlessly creative instead of pretentious, endlessly fascinating instead of excessively adequate. Le Loup could make that album, but this isn't it.